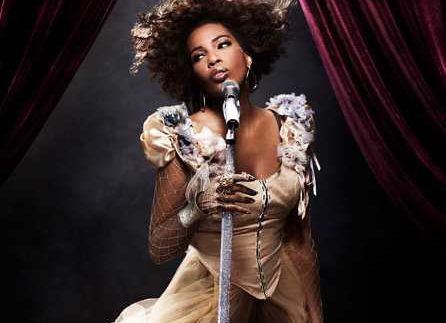 Most of the world
got to know Macy Gray as that singer with the raspy voice singing about trying,
choking, stumbling and stuff, thanks to her first hit single, ‘I Try’ in
1999.   Most of the world hasn’t heard
from her since.

Yes, she’s collaborated
with big names like will.i.am, who co-produced her fourth album, Fatboy Slim,
Queen Latifah, Fergie, Natalie Cole, Slick Rick and Justin Timberlake, among others and she
has also appeared in films and on various film soundtracks. Apart from the UK, where her success has
always been greater than in North America– her first album sold quadruple
platinum there while only triple in the states– only her loyal fans have been
following her career.

The Sellout is Gray’s fifth studio album and features the same
classic vocals to be expected of the raspy singer– which can be seen as either a
good or a bad thing, depending on whether you like her sound. Heavily influenced by Billie Holiday and
Betty Davis, it must be a winning formula; as it has earned her five Grammy
nominations and one win.

However, The Sellout is an uneven album, at times
sounding very much like early 90s R&B, while at others the originality of
her vocals takes over. Songs vary from electro pop grooves to funk and jazz and
some more traditional rock riffs. Some styles work while others don’t quite hit
the mark in today’s music climate.

The title track
is a catchy, mature coming-of-age tune with a good beat, and it seems to
be
about Gray’s surrendering to the nature of her work– which is basically
about pleasing people in order to sell records. On the other hand,
‘Still Hurts’ goes back to
the classic women’s break-up anthem, stereotypical and tired.

‘Beauty in the
World’ is a strange celebratory track that preaches ‘Shake your booty boys and
girls/ For the beauty in the world/ Pick your diamond pick your pearl’ and even
tells us to literally stop and smell the flowers. The heart-warming
potential of the positive track and its attempt to be upbeat is diminished by
an uncreative and silly lyric.

There’s also a
strange appearance by Bobby Brown on the track ‘Real Love’, which admittedly
has some of the most endearing lyrics on the album, ‘I will kiss you even when
you have the flu’– not genius, but sufficiently cute. And Velvet Revolver also helps out on the
track ‘Kissed It’. ‘Help Me’ sees Gray
wrestling with her fate in either heaven or hell, ‘Am I going to heaven, or am
I going to hell/ When I wake up in the morning I just can’t tell’.