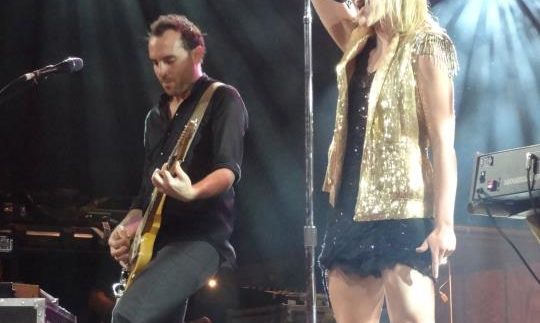 Canada has been good to indie music over
the past decade. The likes of Arcade Fire and Broken Social Scene have, without
being spectacular or ground-breaking, contributed diligently and, as perennial
winners, have even managed to put the maligned Juno Awards on the map.  The latter of said musical armies has served
as a platform for several Canadian acts such as Feist, Stars, Apostle of Hustle
and of course Emily Haines and her band Metric.

Though Haines has fronted Metric since
1999, the road to glory has been a long one – most likely because of a
collective stubbornness that has seen the foursome reluctant to change much
throughout the release of five albums. That’s a hard, heart-wrenching statement
to make, as Haines has more grace, poise and musical zeal in one strand of her
sunny blonde hair than a Gaga or a Riri has in her whole body.

Synthetica begins with the simmering synths of ‘Artificial Nocturne’; a
reflective opener which leads nicely into the leisurely paced, effeminate
rebellion of ‘Youth without Youth’. Pop rears its menacing head in ‘Speed the
Collapse’ but is saved by the dramatic effect of pianos and the echoes of
guitars, though ‘Breathing Underwater’ isn’t so lucky.

Things get grimy with ‘Dreams So Real’,
though; deep base synths threaten to explode into a cacophony of sounds but
don’t. The teasing continues on ‘Lost Kitten’ which sees Haines deliver vocals
like she would in some sort of seductively endearing burlesque show. It’s also
the sort of song suitable for the end of a heart-warming coming-of-age film, as
the troubled protagonist rides a bike down a suburban street straight towards
his future.

‘The Void’ and title track ‘Synthetica’
continue in the same indie-pop vain, though the latter of those elements is
much more predominant. ‘Clone’ does a pretty good job of introducing elements
of an eighties ballad into the mix, before Lou Reed lends a hand on ‘The
Wunderlast’. Although a Lou Reed-Metric collaboration is like sticking a square
peg into a round hole, his eerie, deep, raw voice adds a completely different
dimension. Haines and co would have done well to end the album there, because
the completely unremarkable ‘Nothing but Time’ seems exactly that – nothing but
time.