Everybody Wants to Be on TV

Scouting for Girls: Everybody Wants to Be on TV 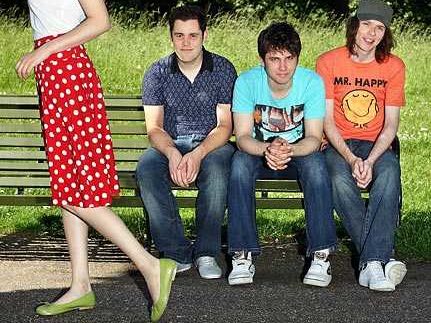 According to several UK
music sites, Scouting for Girls can best be described as your average pub band.
For those of us who haven’t been inside an average pub, this UK band makes harmless pop ballads
that border on easily forgettable. Nominated for British Breakthrough Act at the 2009 BRIT Awards, Scouting
for Girls deliver radio-friendly pop with upbeat hits like ‘She’s So Lovely’.

Their second album following their eponymous 2008 debut, Everybody Wants to Be On TV starts off with ‘This Ain’t A Love
Song,’ a heartfelt, sing-along track with simple lyrics like ‘And I’m a little
bit lost without you/ I’m a bloody big mess inside’ – not exactly creative but
endearing nonetheless. The song’s easy and catchy melody makes a promising
start to an album that unfortunately fails to live up to our expectations.

With several tracks that attempt to criticise the perils of fame, casual
sex and girls of moral ambiguity, the album doesn’t surpass the standard pop
realm of annoying but catchy piano melodies and lyrics that probably took a few
minutes to cook up.

On ‘Famous,’ lead singer Roy Stride attempts a satirical critique at
society’s obsession with fame, yet the observations he makes are pretty
standard: ‘ I want to be known
for just being famous/ I can’t act, I can’t dance, I can’t sing/ But I’m young
and I’m pretty,’ he sings. You don’t say. On the somewhat offensive ‘Posh Girls,’ they
claim that ‘Posh girls have good manners/ But they go like the clappers,’ a
remark that makes the listener wonder if the band is composed of rejected
fifteen-year-old boys. On ‘1+1=3,’ they try their hand at sex education and
warn against casual sex using simple math: ‘It
used to be just me/ But that’s how one and one makes three. ‘

Then there’s the astonishingly named ‘Little Miss Naughty,’ which
confirms our suspicion that their target audience are fifteen-year old girls
that don’t mind being called little or naughty. The tune starts off with an
annoying auto tune vocal that’s more Polish disco pop than pub rock, and Stride
laments ‘A little mistake,
and that’s how you caught me/
Running around with little Miss Naughty,’ against a rather shrill bass band
backing.

Apart from ‘This
Ain’t A love Song,’ the album’s only bright spot is ‘Take a Chance On Us,’
which starts off with an uplifting orchestra backing and a piano melody that sounds
too much like Daniel Powter’s ‘Had A Bad Day’.

Maybe we’re too
cynical, and maybe the fifteen-year-old girls will love this album; but Everyone Wants to Be on TV is one of
those albums that may not necessarily outlive its radio airplay.