She & Him: Volume Two 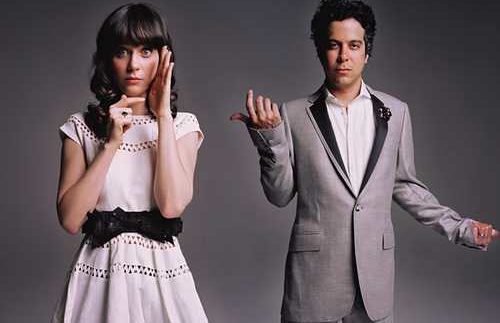 Apparently,
Zooey Deschanel can do no wrong, and though one may not figure her for a rock
star, her second album proves otherwise. Collaborating with Matt Ward, the
daring duo She & Him has once again orchestrated something akin to opening
a time capsule into the time of sunny AM radio. Whether or not you dig their
album Volume Two doesn’t seem to
matter; they swing to their own beat.

Everything
about them screams vintage. From Deschanel’s baby doll persona to her twangy use
of the word ‘darlin’, the album sounds like it was recorded in the hot south, circa
1976. Deschanel may not have the most
powerful singing chops, but she is oh-so-charming and the swooning background
instrumentals and vocals make for interesting, harmless and easy listening.

Deschanel also gets
props for writing eleven of the thirteen songs herself, placing her firmly in
the classic singer-songwriter genre. Her
lyrics are so cheeky; that we sometimes wonder if she’s being serious or just
having a go.

Even the
covers are carefully chosen, with the lyrics to ‘Gonna Get Along Without You
Now’ suiting Deschanel’s old-fashioned quirk perfectly, ’Uh huh, mmhmm, gonna
get along without you now/…Thought I’d find somebody who was twice as cute/`Cause
I didn’t like you anyhow.’ Old country meets
new Indie seems the perfect fusion for her niche.

Petula Clark,
Nancy Sinatra, and Loretta Lynn all come to mind; as songs steal snippets of
sassy wistfulness. Awkward at times, and
beautiful on other tracks, such as ‘If You Can’t Sleep,’ which sounds like a
Disney lullaby à la ‘Baby Mine.’ The laid-back grooves are at least worth a
sampling to see if it’s worthy of your record collection. We think so. And
their music video is an absolute confection, too.