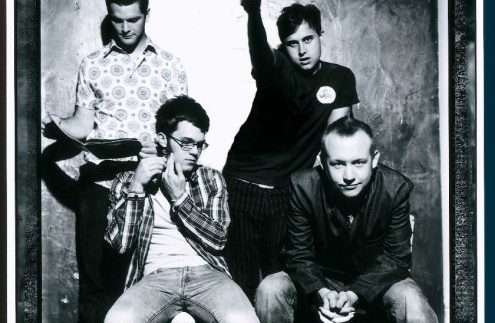 The Fray
captured the hearts of pop-rock fans all over the world with their hit ‘How to Save a
Life’ in 2005 from their multi-platinum album of the same name. The band’s distinct
vocals, rock-heavy instrumentals and intensely, emotional
lyrics have made them a household name. With its title, one can only assume that their new album Scars &
Stories will mean more of what has pushed the band to the top- even if it
makes the whole album sound like one long, continuous track.

While
presenting fans with what they’ve loved to listen to in previous albums seems
like a safe tactic for the quartet, a listen to the opening single ‘Heartbeat’
only reminds listeners of their previous single ‘You Found Me’; with the latter
winning favour. They both have a similar chorus as well as similar drums and guitar
break combinations, though this album takes a more spiritual approach, especially with closing song ‘Be Still’ –  a piano lullaby
that references biblical passages.

However, ‘Turn
Me On’ breaks out of the rock cycle with a pop rhythm and quick, high-pitched
guitar riffs; all the while maintaining their original spirit. They return to
business as usual with ‘Run for Life’, which could easily be a track on their
other three albums.

There are a
few songs that make the album worth the wait, though. ‘Munich’ has a fresh
violin intro that develops into a subtle beat and a heartfelt, anthem-like
chorus. Though the lyrics are composed in forms of stories – with intros,
endings and sometimes dialogues – the album’s main theme fundamentally revolves
around love. This is made clear in most songs without a hint of hidden meaning beyond
what appears on the surface – which is apparent in songs ‘Here We Are’ and ‘The
Fighter’.

For a powerfully
titled album such as Scars & Stories, listeners might expect moving and
inspiring lyrics, a recipe that the Denver natives have continued to build
their popularity and success on since their debut in 2005. Unfortunately, the
result is an album that’s too predictable and ultimately disappointing. While there
might be a track or two that would be worthy of a few replays, the album
doesn’t give The Fray its needed push in the right direction. Scars &
Stories has the band standing still with no real indication as to how and to
where they can develop.