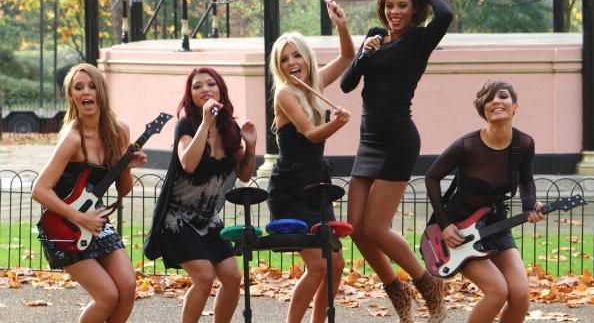 Although they achieved relative success
through their first two albums Chasing Lights (2008) and Wordshaker
(2009), British girl group The Saturdays
have yet to reach the heights of their predecessors Girls Aloud, whom they
supported on tour in 2008. With Cheryl Tweedy and co. on hiatus, the world is now
theirs to conquer.

However,
Headlines! is not the way to go about getting
themselves noticed. Of the eight tracks, three have been originally released on
Wordshaker. Why re-release them, you ask? No one knows.

‘Ego’ and ‘Forever is Over’ stand out,
having done so on their previous album. The fact that the record’s best songs
have already been released makes this whole mini-album futile. The rest of the
tracks are no better than b-sides.

Most of the acclaim that the quintet has
received over the last few years has been based on their eclectic blend of
styles. Formed in London in 2007, the group consists of Una Healy, Mollie King, Frankie Sandford, Vanessa White and
Rochelle Wiseman; all very good-looking women with reasonably powerful pop vocals.

Headlines! does
little to enhance their stock; as the new tracks exhibit little more than
overlapping cliché pop and limp dance music. Powerful vocals that would
traditionally fit a ballad are worked over pseudo-dance beats, which presents
nothing new or different.

Rumours are flying that the next album is
due to be recorded in the USA–
with a big-name American producer, no doubt. It would appear that this is no
more than a stopgap until then.

Unfortunately, the old adage of ‘if it ain’t broke, don’t fix it’
does not work in modern pop music. At some point, we need to see some new and
improved material.

It isn’t all bad; the heavy-handed
R&B beat on ‘Puppets’ will have you nodding your head, and ‘Karma’ has a pleasant, slightly
indie edge to it. But then again, it’s a matter of moving forward, and this
collection of songs already sounds dated; as is the nature of pop music.

While fans of The Saturdays may enjoy the
new material, for the rest of the world, it seems a very lazy and unnecessary
release. The album sounds like a refresher course on The Saturdays same old
sound; someone must have thought this album a vital step for keeping the group near
the limelight.