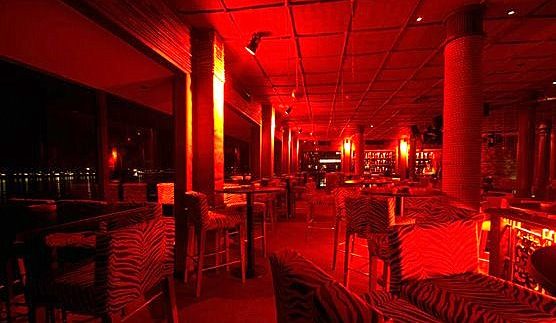 Taking up the ground floor of the Trianon boat in Giza, Bamboo is just a
few steps downstairs from the increasingly popular Yasso. The club hopes to
stay open with one big difference from its upstairs neighbour, and most others;
Bamboo is slanted as an after-hours club.

The club is is open until 6AM, and so when club goers, not only from above
but all over, need to leave their respected dancehall but aren’t quite ready to
be homebound, they can find solace in the red lit and distinctly lacking-in-bamboo club- for a whole two-to-three hours more!

Amidst Bamboo’s gaudy backdrop and indulgent décor, taken not from its
namesake but seemingly out of an African themed 80’s event, this
reviewer found it to be a seamy sort of place that any respectable club goer might turn a cold shoulder
to. However, most of us are frankly not respectable in any
sense of the word by this point, making turning a blind eye a more suitable
cliché for this scenario.

The music in Bamboo is what they call eclectic; ’California Love’ fades
into ’El Donia Zay El Morgeha” with some Adele thrown in. Classic rock,
hip-hop, and Egyptian music? It feels as if Bamboo knows the state clubbers are
in by now, and just hopes that they won’t notice. Though the crowd, made up of those
from Yasso cramped into the much smaller space that is Bamboo, danced and tried
not to get burnt by people’s cigarettes, they seemed to enjoy it all the same.

There was a 100LE cover to enter Bamboo – again, competition with Yasso
feels prevalent – with one free drink included. After the first round of drinks
you will find that Bamboo is not a cheap club. Luckily though, you are paying
for the fine atmosphere. One vodka and Red Bull must have run more than 100LE, because the three ordered took their toll costing 320LE.

In this reviewer’s opinion, Bamboo is just not worth the effort of a
sole visit; leading one to wonder whether enough business will be generated to
keep it running. Based on the assumption that clubbers will dismiss
going home and walk into this Zebra-chair-backed jungle instead, or possibly
just fall off the Yasso balcony into the Nile and thus discover an alternative;
Bamboo may stand a chance.

With all of its shortcomings, Bamboo is still not a completely dreadful
place. Staying open later than any other club, this arena is attractive in its
own right.  However, this reviewer would
appreciate that when a venue decides on a name for their place – something to
really pull people in – they would consider fusing both that name and whatever
it is the place is trying to offer.

You can Bamboo-it-up right up until breakfast time.

The size of this club and its price make it hard to want to stay for very long.