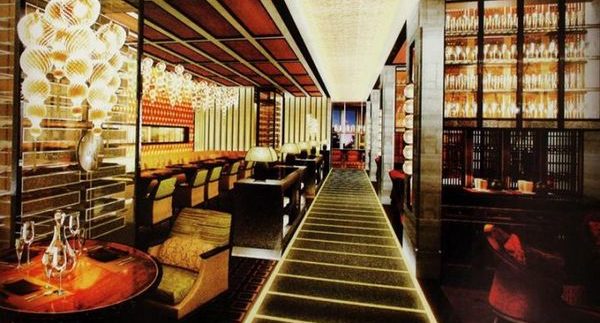 Formerly known as Spice, Four Seasons Nile Plaza’s 8 is quickly becoming the go-to for Asian cuisine among Cairo’s elite. With a view overlooking the Nile and an eclectic interior, it has quickly become a Cairo 360 favourite too.

The floor is run mostly, but not exclusively, by well-turned out Asian staff who provide levels of service unbeknown to this city. Gracious, polite, prompt and always smiling, it really does make a difference to the dining experience.

Even if you’re not sat by the glass wall overlooking the Nile, the detailing and finesse of the décor is more than enough to keep curious eyes busy – as will the extensive Cantonese dining options.

One of the more peculiar items on the menu is the jellyfish. At 92LE, it’s by no means cheap, but it is interesting. The slices are usually dried for storage, before being rehydrated and served chilled with a soy sauce-based dressing that includes sesame oil and chilli sauce. It’s certainly an acquired taste and is more about texture than flavour. The long strips feel exactly as you’d imagine minus a follow-up gag reflex.

An order of steamed scallop dumplings (73LE) arrived as steamed shrimp dumplings, but was pleasing nonetheless. The shrimp itself was perfectly cooked if a little bland on the pallet. That wasn’t the case for the crispy lobster entrée (262LE). Prepared in a light, garlic salt tempura batter, the godly bite-size pieces of lobster meat were nothing short of outstanding; light and crispy on the outside, soft and tender on the inside. They also lend themselves pretty well to the selection of dressings served as standard by the restaurant; diced red chilli, ginger and vinegar, chilli oil with peppers, soy sauce and sweet and sour sauce.

Elsewhere in the edible-animal kingdom, the wok-fried beef fillet (136LE) comes with a portion of vegetables doused in XO sauce; a popular fish-based condiment from Hong Kong that brings together dried scallop and shrimp, dried chilli and canola oil. In truth, the taste of 8’s XO sauce is far from being as flavourful and downright weird as the ingredients suggest, but it lets the strips of fillet do the talking for the dish. Though tender and plentiful, the beef may need a bit more seasoning for palates more accustomed to western cuisines.

This wasn’t so much of a problem with the wok-fried chicken with honey pepper sauce (112LE). That perfect balance of sweetness from the honey and zing from the pepper brought the flavour of the chicken pieces to a new level – a perfect coating for poultry. No Asian meal would be complete without carbohydrates and 8’s vegetable noodles (60LE) fair well, although the complexities of the meat dishes are better suited to a bowl of plain steamed rice.

The wonderment of the menu continues well into desserts. The mango pudding (30LE) is a suitably bright full-stop to the meal; light, cool and pleasingly refreshing.  Denser options include fried banana (40LE) and sesame custard balls (45LE). The former utilises a contrast in textures in spring-roll form, though the gooey banana lacked taste and the dish as a whole lacked sweetness. On the other hand, the sesame custard balls were superb. Each pastry ball is coated with sesame seeds and filled with a light custard, again relying on texture for punch. If a lighter dessert is favoured, 8 customarily delivers an iced tray adorned with fresh fruit slices after your meal .
If you’re more accustomed to the devilishly pleasing greasy brand of Asian food, your brain might tell you that 8’s dishes are lacking. If so, your brain is lying to you. Everything is fresh and prepared immaculately and minimally.

Did you know that jellyfish is dried for storage because it can spoil within an hour of being caught. Mental!

Highest levels of service we’ve experienced in Cairo, delivered by a genuinely enthusiastic and warm staff.