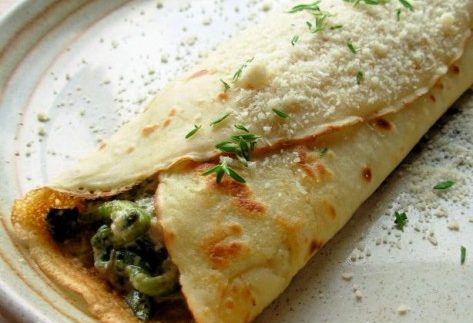 Known for its greenery and quiet, Maadi is host to a number of restaurants and cafes offering breakfast options for fans of the sunny outdoors. Among these is Akasya; a restaurant that takes up the space that was once occupied by Euro Deli on Road 232.

Retaining much of the same décor and outdoor area that made Euro Deli so popular, breakfast was in order.

Visiting early in the morning makes the August sun more bearable, and the staff are noticeably more attentive when there are less people there.

We took our seats garden-side, and dove into a menu that’s comprised of a number of breakfast options including crepes, omelettes, bagels and sandwiches. They also offer pizza, pasta and chicken, beef and shrimp main courses if you’d rather come by for lunch or dinner.

We opted for Cheese Sambousak (20LE) from the appetisers, Spinach with Cheese Crepe (34LE) and a Roast Beef with Cheddar Baguette (26LE).

Serving time can be rather long, though this time around, we’d say it was average. Given that the restaurant wasn’t crowded, and our orders were fairly simple to make, they should’ve been served faster.

Eventually, four pieces of Cheese Sambousak arrived on a bed of lettuce at our table; the dough was nice and crunchy, but the cheese was rather bland and was in dire need of some kind of seasoning.

The Spinach and Cheese Crepe arrived next; essentially a blob of cheese and oozing with spinach and cream cheese – and not in the good way. The ratio of filling to crepe was extremely off, you could hardly taste any crepe through the ridiculous amount of cheese and the sheer amount of oil spilling out.

We hoped the Roast Beef sandwich could salvage the breakfast, but we were wrong. The decently-sized, toasted baguette contained lettuce, mayo, melted cheddar cheese and thick slices of roast beef. While we certainly appreciate the use of real roast beef and not the processed and packaged supermarket kind, it had no flavour whatsoever. The sandwich tasted like cheese, mayo, stale lettuce and a large, very chewy object resembling meat but tasting nothing like it thanks, once again, to a severe lack of seasoning.

While the food was disappointing, the cheque was pretty inexpensive and the atmosphere was great. Akasya’s outdoor area is perfect for people who work on the go or like to have business meetings outside the office, but maybe try the omelettes instead?

The quiet and sunny outdoor area.