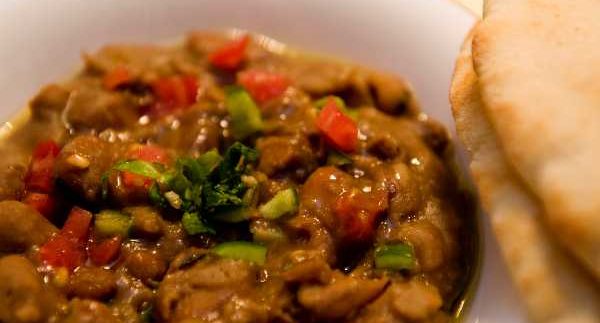 Al Ouda has
long been known to be the Nasr City counterpart of another Levantine foul eatery,
Abo Riyadh in Heliopolis.
A secret known only to inhabitants of Cairo’s
largest neighbourhood, the enthusiasm for their famous Qudsia foul reaches
feverish heights during the month of Ramadan, whereupon it is consumed along
with other sohour staples in monstrous quantities. And boy is it good. Outside
of the Ramadan season, Al Ouda Restaurant serves up some of the most
consistently satisfying food in Cairo.

FYI: Qudsia
foul is a mixture of Egyptian foul medammes, Syrian hummus and dakka– a tangy
garlic and cilantro dressing, all drizzled with delicious olive oil. The usual
suspects also make an appearance and should not be missed; no decent sohour is
complete without French fries, falafels made with hummus (as opposed to the
fava bean Egyptian variant), green salad, omelette and shami flatbread. These
are all deceptively simple to make– deceptively being the operative word– and
Al Ouda excels at each and every one of them. Also on offer is an impressive
but all-too familiar array of fiteer. Yet, over the course of many visits in many
years, this reviewer has yet to see a single fiteer be delivered out of the
kitchen. You come to Ouda for the foul, bub.

The sohour rush
begins just as the clock strikes midnight; after that, you will be hard pressed
to find a free table on the adjacent curb-side. Indeed, the seating is limited
to a score of plastic tables and chairs arranged on the curb beside the
restaurant, but the crowd is served as efficiently as possible by the
restaurant staff. You will have to work hard to attract and hold a waiter’s
attention, but the orders are never forgotten, and never mixed up.

Yes, it is
a foul restaurant and yes, it does have street-side seating; but it is also
friendly to both sexes– there is no point in limiting the enjoyment to only
half of the gene-pool, is there? Best enjoyed in a group, the prices are due
north of affordable. Two plates of Qudsia foul, an order of falafel, bread, green
salad, French fries and an omelette with two Pepsi cans costs 35LE, excluding
tip.

Don’t dilly dally with your orders; and keep it simple: quick orders receive quick service, and being friendly to the waiters reaps big dividends.

The hustle and bustle of the sohour rush is a welcome accompaniment to a bare bones Egyptian sohour. Not a single TV blaring music videos in sight.

Service can be a bit slow during rush hours, and after midnight, there can be a wait of up to 15 minutes for a free table, especially for big parties. Make your own arrangements to reserve a soon-to-be-freed up table; the wait staff will not be of much help.