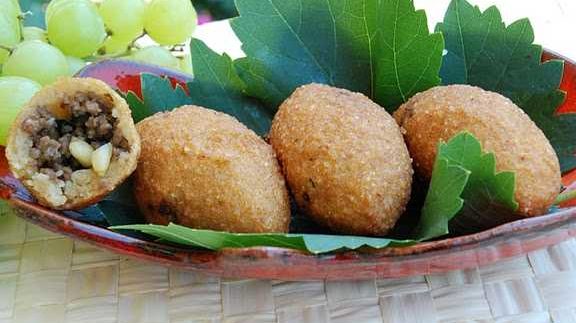 We first got a sneak preview of the authentic Syrian cuisine of Amar
El Sham during Ramadan, when the restaurant set up a kitchen and lounge
inside the Gezirah
Club in Zamalek.

Smitten as we were with their rich daoud basha, delicious thin shami
bread, falafel and shawerma; you can imagine our anticipation when we heard that
Amar El Sham now has a permanent location in the boat docked next to Sofitel
Gezirah Hotel.

Making its grand entrance onto Cairo’s
dining scene on November 3rd, 2010; Amar El Sham is an ambitious restaurant with
not one but three dining levels: an indoor family restaurant serving
delicacies such as the Syrian raw kebbeh, a mid-level café and an upper-deck open-air
shisha lounge.

It would be difficult to get more authentically Syrian than at Amar El
Sham: everything from the meats and spices to the uniforms and soft-spoken waiters
have been imported from the motherland.

Amar El Sham caters to an interactive dining experience; two kabab
stations are located inside the first-floor restaurant in an open-air kitchen.
On both the first and third levels, a bread oven station is set up, where a
chef constantly kneads dough, tossing discs of bread into the air before laying
them onto a pillow to pound them into shape.

Glasses of sweet chilled jallab are served along with the salty yoghurt
ayran. Shisha is also available downstairs, with flavours of guava, cantaloupe
and peach yielding smooth, well-balanced smoke.

An order of well-rounded appetisers (ranging between 15LE and 20LE) yielded
bowls of light and pungent baba ghanough, salty tehina, and fatoush salads
laden with crisp golden toasted bread, onions, tomato and cucumbers. We also
ordered tasters of fasoulia, steamed and sautéed with sesame; as well as platters of plump,
steaming kebbeh and taameya. The taameya was a phenomenon with a crisp
toasted shell and flavourful filling. Made with hummus, unlike most taameya
served in Egypt;
it was neither overly greasy nor overly dry, and cut well with the tangy tehina.

The kebbeh yielded a medley of flavours with ground meat of sweet and
savoury spices. Plates of aromatic yellow rice, bulgur seasoned with nuts and
raisins, and piles of airy crêpe-like Syrian bread continued to arrive
throughout our meal.

Our main course of chicken shawerma was succulent and flavourful with a
gentle citrus dressing, pickles and potent garlic sauce. An entrée of fatta
yielded thick cuts of boiled lamb, pairing with roasted garlic and a tangy
yoghurt base. Entrées at Amar El Sham range between 50LE and 80LE, making the
experience relatively affordable for all its imported extravagance.

Our evening ended with porcelain cups of booza; made daily in the
kitchen, the ice-cream was creamy with hints of rose, pistachio nuts crumbled
over the top, making for a pleasing finale.

What the service lacked in expedience– a few friendly reminders about our
orders were necessary– they made up for in friendliness and charm; and the
overall ambiance outweighed any discomfort that our dining partners experienced due
to the wait.

The restaurant is planning to open a Syrian seafood restaurant in the boat’s second level; stay tuned for all the latest developments.

The authenticity and quality of ingredients made this a dining experience to remember.

Since the restaurant is new, and since many of the items are made on the spot, some menu items – such as the specially made taameya – can run out; so bear with the staff and enjoy the view.