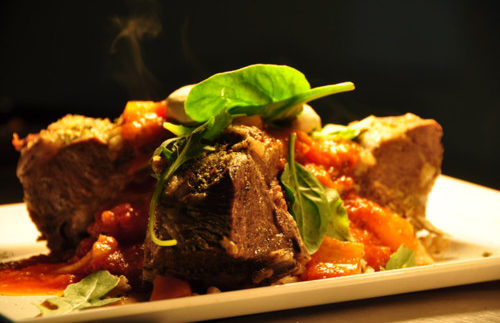 For
weeks we’d heard rumours about an elusive Sudanese-Ethiopian restaurant
somewhere in Dokki that serves delicious food. We immediately took to the
streets asking every possible soul if they had ever heard of it. It was almost
like treasure hunting. Naturally though, the best part comes when you find your treasure and are
eagerly awaiting your dishes.

Arij is
an Eastern-Sundanese restaurant located close to the Dokki Metro station on the
tiny El Nagar Street which is easily locatable by Hassona. Geography
buffs will of course know that Sudan shares a border on the east with Ethiopia,
and so culture and cuisine has inevitably seeped over the borders. It’s a
typical no frills, hole-in-the-wall type of place with plastic chairs, randomly
placed tables and a television on high volume. When we asked the waiter for a
menu he instead brought us Om Mohamed who is their version of a menu, as well
as the master chef. We made some haphazard requests and were promised something
special.

It took a while for the food to arrive which is always a good sign
because it probably means it’s freshly prepared. When Om Mohamed finally returned
with our plates, we were on cloud number nine. We were crazy about the rigla,
which is a spinach dish; it was a little spicy and the fresh spinach was well
prepared. We also devoured the salata aswad, which had eggplant and sesame seeds.
It tasted like something in between tehina and baba ghanoush. We got a taste of
Ethiopian cuisine with the zeghni. It was beef in a spicy sauce with a touch of
tomato. Even if you are not a fan of spicy food you should try this. We also
had the faneya patatas; a potato and minced meat dish. The potatoes were
deliciously flavoured and boiled to perfection – where their consistency was
neither too mushy nor too hard. Just when we thought we had all the best
dishes, Om Mohamed came out with a plate of sheya lamb. It was hands down the
best grilled lamb we had in a long time. Eat your heart out France, Italy and
all other countries famous for their lamb dishes. The Sudanese know how to rock
lamb. The best part though, was that the food was presented on pancake-like
bread; it was very light with a nice tanginess to it. The bread functions as a
plate, so essentially, you are eating your plate.

Although
we had to hunt it down, our visit to Arij was absolutely worth it, especially
as we ended up paying just 120LE for all the food we listed above. We also
received side dishes with green salad and lots of bread. Paying 120LE for a
group of five for all this delicious food is absolutely a unique experience in
this city.

As with all similar restaurants, Arij isn't particularly pleasant on the eye.