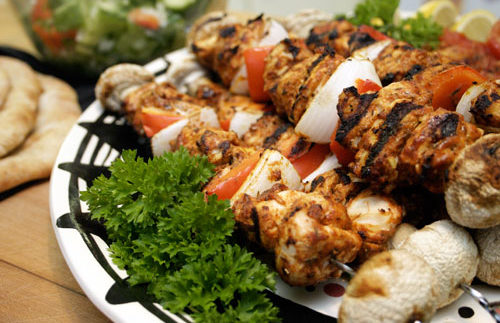 Novotel in Zamalek is a considerably elusive hotel; there
are no mainstream events that take place in it, and it has no outlets that are particularly
known around town – let alone that are popular. So when we heard about Arjeela
opening on its grounds there was more than a new venue to be curious about;
there was the hotel itself.

Located on the corner of Zamalek just off Midan Kasr El-Nil,
Novotel is quite small and its clean-cut interior is reminiscent of boutique
hotels found around the world. It’s unfortunate that they don’t serve alcohol.

Arjeela, which is shisha in Lebanese, is just up a quick
flight of stairs to the left of the hotel’s main entrance. The majority of the space is outdoors and it takes up an
interesting portion of the hotel.  Curved
around the outer wall, facing the main road, Arjeela is almost like a long,
turning balcony. The décor is kept understated with soft browns and beiges; the
music during our visit was unobtrusive and calming.

The menu that is also the placemat made ordering easy and
relaxed. From a generous selection of authentic Lebanese dishes, with names
like jawaneh and maqaniq, we chose hummus (13.5LE), garlic dip (12LE), fattoush
salad (15LE), cheese sambousak (18LE) and arayes (28LE) – which are essentially
hawawshi– from the cold and hot mezze sections; and shish tawouk (40LE) from
the main dishes. These all arrived after a fresh lemon-mint drink (19LE) that
was pleasingly sweet and sour.

The food was all served at the same time, filling up our
little table. The hummus was decent, though it lacked a needed tanginess; the
garlic dip wasn’t good at all, tasting as we’d imagine blubber would. The
fattoush salad was crunchy and zesty; the cheese sambousak was lightly crispy
and delightfully oozed with well-seasoned feta cheese – both dishes were eaten
up completely.

The arayes, though we believed were a starter – came as a
full dish with French fries on the side. The meat in the sandwiches was rich
and the outer bread nice and toasty, but it could have been firmer and with a
fuller bite.  The shish tawouk dish was
very well flavoured, with roasted peppers on the skewer; this was also eaten all
up, even though some pieces were a little on the dry side.

We settled on a universally appreciated dessert: crepes with
Nutella (28LE). The two rolled up crepes came with ice cream and had just the
right amount of sweetness to end the meal with. Naturally we had to try the
shisha; the peach one (25LE) was well-rounded with flavour and the signature
Arjeela flavour (30LE) had a sweet flowery aroma.

The service was very pleasant and eager to help; however the
popularity of the place, where there’s a constant stream of people coming in
and out, could be a little challenging at times.

The evening overall was a successful one and for this reason
we think Arjeela is a great place to go if you’re looking for a nice atmosphere
and a spot to enjoy your shisha.

Check your bill because with so many customers there may be a mix-up.

They have cards, backgammon and chess.

The bread they served was cold.