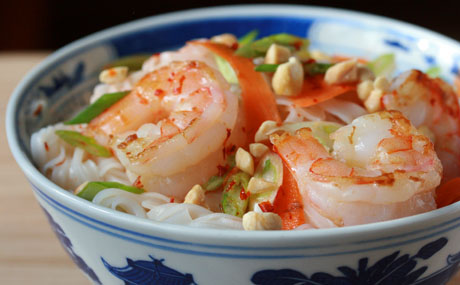 Cairo is constantly being introduced to new restaurants that
promise authentic cuisines and one-of-a-kind experiences; however it is sad,
but true, that most of these ventures fail to make the mark. Not Bua Khao, though. Just off Horreya Square in Maadi, this Thai restaurant is no secret to
the residents of Maadi; on the contrary, it is their proud and hidden gem.

On
the same block as Cellar Door, Bua Khao
is very humble despite its popularity. Going upstairs to reach it, the actual interior is not that
impressive. In fact, it’s actually quite shabby, but the downplayed décor adds to the charm and
experience in a way – it highlights the food, which is the whole point.

After choosing a seat towards the back of the restaurant, we
received our menus and quickly made our orders from the different selections of
appetisers, soups, curries and noodle dishes. Feeling hungry, we settled on the
vegetarian spring rolls (10LE) and papaya salad (30LE) to start; the green
chicken curry with coconut milk (25LE) and Pad Thai with shrimps (35LE) for a
main. First though, we ordered Thai iced-tea (15LE) and coconut water (17LE) to
quench our thirst. The tea looked like regular tea with milk, only it had ice
added to it. It wasn’t the ideal choice to have before a meal since it was
quite sweet but its smooth texture was pleasing. The coconut water on the other
hand was outright delicious. Although it was also relatively sweet, the drink
was light, refreshing and irresistible – it didn’t interfere with the meal
ahead.

Headed by a Thai chef who has been there for years, the
ingredients are imported which comes as no surprise considering the quality of
the food. The spring rolls came in a serving of three with a sweet dipping sauce.
They were crunchy on the outside and soft on the inside – they finished quite quickly. The papaya salad, though requested mild, was rather
spicy but it didn’t matter because it was just so good. A mix of grated papaya,
tomatoes, green beans and peanuts, the salad was invigorating with all sorts of
flavours and textures coming together.

Leaving us ample time to finish nibbling on the remainders
of our starters, the waiter then brought the two main dishes. The Pad Thai
noodles were tasty; the shrimp were well cooked and appropriately cleaned, though
the noodles were slightly on the gooey side – some parts were clumped
together, however this did not prevent the plate from being finished. The curry
on the other hand was absolutely wonderful. Served in a small China pot with a
matching spoon, the sauce was perfectly creamy without being too heavy; the
balance of flavours between the coconut, curry and spices was ideal. The flawless
chicken pieces were cooked to perfection, softly breaking apart with the
chopsticks.

Although the kitchen was almost closing, the chef was kind
enough to make us a dessert anyway. We decided on the traditional far-eastern
fried bananas with ice cream (25LE). The banana was beautifully crisp on the
outside and warm and mushy on the inside, while the ice cream’s cool
creaminess complemented it. The parts came together with a slight hint of cinnamon and like the
dishes before, it was eaten up pretty quickly.

Bua Khao is not the most visually appealing place, but the
service is relaxed and amicable. In addition, the quality of the food is like few other
places around town and its prices are remarkably low compared to other venues. So for all these reasons, nice interior or not, Bua
Khao is definitely one of the top restaurants around.

Ask the waiter for items that aren’t on the menu, the papaya salad for example isn’t.

The interior isn’t that nicest around, though it adds to its charm.