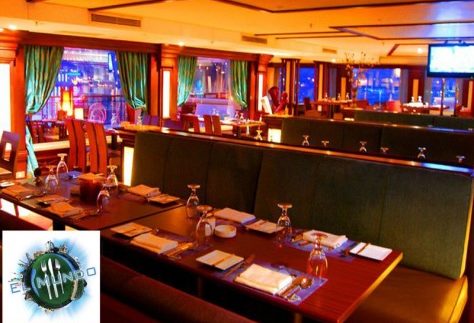 The egos at Cairo 360
are small and modest enough to give any venue the benefit of the doubt. But
when a restaurant consistently commits the most basic of errors, it leaves us
in the unfortunate situation of scorning those who have wronged us. In this
case, the culprit is Nile Lily restaurant, El Mundo.

The Manial restaurant
offers two set fetar menus at 120LE and 140LE. They aren’t different, but as
the difference in price suggests, the latter offers diners more choices.
Ramadan drinks –karkadeh, tamr hindi and amar el din – are served haphazardly
to your order, minutes before the evening prayer-call signals the break of
fast. Frustratingly, some of our five-man group were given the wrong drinks,
while some didn’t receive any at all, despite several complaints. It was a
blessing in disguise though; they were the sweetest drinks we’ve had this
Ramadan.

The taste was quickly
neutralised with small bowls of cream of chicken and lentil soups, the latter
of which was heavy on the salt. The following salad course delivered two barely
distinguishable Greek and fattoush salads, which were fresh and pleasant enough
in their small portions. The addition of a mint garnish to the Greek salad was great with
the cubes of feta cheese.

An uneven spread of
cheese sambousak and spring rolls arrived hot and crispy, before the main
course touched down on our tables. For those shelling out on the 140LE set
menu, mains options include Egyptian fatta with veal, mushroom scaloppini,
Cajun shrimp and sharkaseya.

For those unapprised
of Egyptian cuisine, fatta is a carb-heavy dish of rice with tomato-soaked
bread and meat. This is a dish that refuses to yield to cooking logic, but the
combination works. The rice was cooked well, the sauce was rich and tangy and
the cubes of veal meat were tender and full of flavour. There was very little
that made the shrimp ‘Cajun’, but they were grilled and seasoned well. The
sharkaseya – a traditional Turkish dish of chicken with walnut sauce – was
completely devoid of taste and the sauce rung of the bitterness that you often get
with walnuts. The mushroom scaloppini was pretty pedestrian and that cardinal
sin of overcooking the meat was scandalously committed, to our horror.

Underwhelmed by the
meal thus far, we sighed as the desserts were delivered, fearing more of the
same standard. But praise the lord; we were wrong, so very wrong. Made with a
spectacular combination of flavours, the peach konafa and ice cream was nothing
short of phenomenal. At the base of an oval bowl, warm, sticky peach compote was
topped with a thin, delicately arranged layer of konafa and a single scoop of
cold vanilla ice cream. Though very sweet by itself, the konafa and compote
worked perfectly with the ice cream to make a brilliant combination of flavours
and textures.

The same couldn’t be
said of the mango mahalabeya. Thinking that the mahalabeya itself would be
infused with mango, we were disappointed to find slices of syrup-glazed mango
sitting atop it; the flavours just didn’t work and the portion was far too big.

Tainted by large, boisterous
parties, rogue children running around and overwhelmed, uninterested staff, El
Mundo has done little to enhance what is generally a respected standing in the
scope of reasonably priced international cuisine in Cairo.

Manial’s Nile Lily boat is also home to Ahlein, Sky Lounge and Andalusia, all of which offer fetar and sohour options.