ESCA: An Impressive Newcomer to the Egyptian Food Scene

When we heard that Heliopolis’ newly opened restaurant, ESCA, had its menu developed by Chef Wessam Massoud (and possessed none other than Top Chef Middle East winner, Mustafa Seif, acting as its Head Chef) our expectations automatically soared to the skies. This is exactly why we decided to give this place a visit: we just had to know if this venue lived up to the legacy brought forward by the super star chefs behind it.

As a venue, ESCA is home to a beautifully elegant grey-scale theme, one that applies to almost the entirety of its setting; from the chairs, to the patterned walls, to the marble tables, to the drinking glasses, and finally to the place mats, the grey color palette saturates one’s visual sense with a certain level of grace. Upon entering the restaurant, one immediately notices, the linear design that simultaneously comprises the host station and the seating area on the left. There is also a fantastic bar located on the right hand side, and appearing along side two great companions: a chic wine display, and an eye-catching statue of a gazelle. We also loved the glass walls that were located behind the tables, as they contributed to making the place seem more spacious than it actually was. 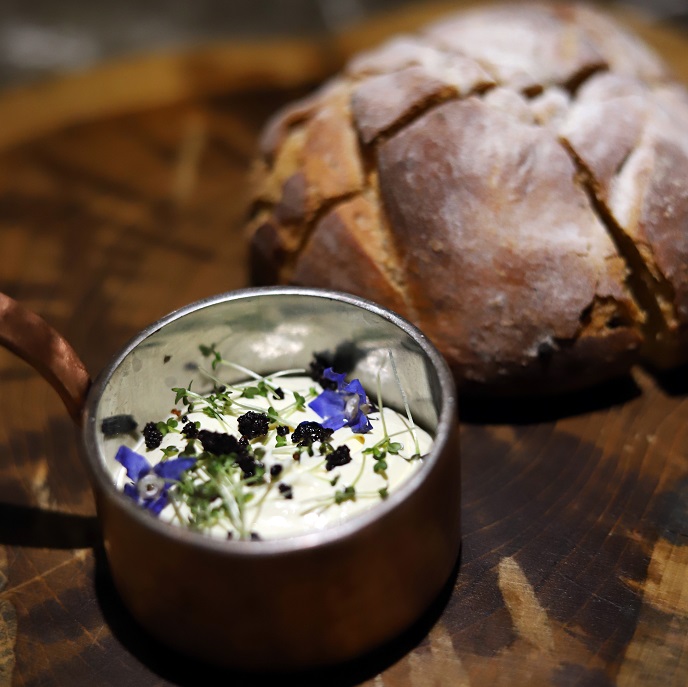 Their menu is all about simple classics, served and executed  with a creative twist. For example, their complimentary bread basket came with garlicky, delicious whipped butter (with a consistency that allowed for easy spreading). As for the rustic bread – which boasted small bits of sun-dried tomatoes – it had a pleasant crunch on the outside and a soft, fluffiness to it on the inside. 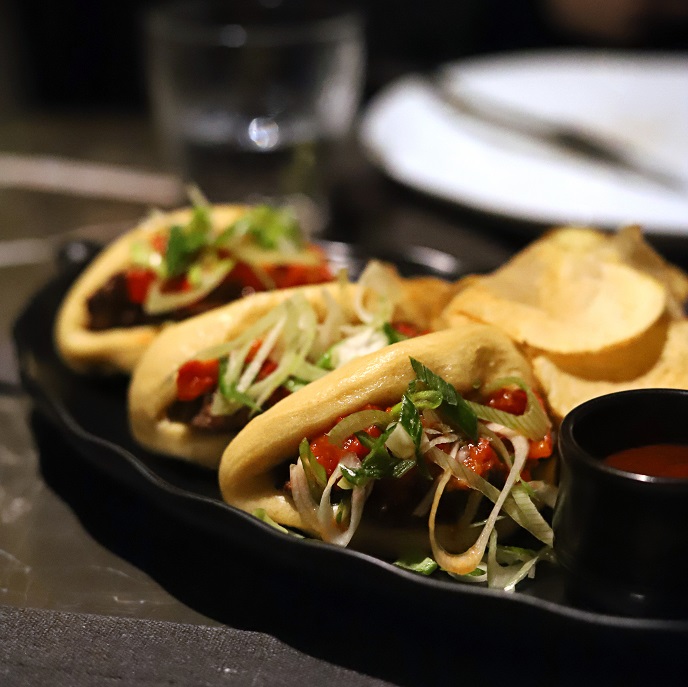 Upon looking at the menu, it became clear that choosing an appetiser would be a near impossible mission; when the choice is between Hazelnut Chicken Liver, Beef Tagliata, Duck Briouat Rolls, and Steak Bao Buns (125LE), it is not a surprise it took us more time than usual to select our appetiser. We ended up, however, going with the latter of the choices, as it was simply seemed too unique of an option to miss.

These steamed buns possessed a chewy, soft texture, and were simultaneously stuffed with apple slices, and perfectly marinated/seasoned thin pieces of steak. The dish also contained Tunisian red pepper relish; this added a sweet taste, consequently complementing the flavors emerging from the lemon grass, and the scallions. The buns were served with well-prepared homemade potato chips, and a spicy ketchup dip.

Unlike the appetisers, the options for the mains were limited to only seven dishes, at the time of our visit. With three of the dishes being beefsteak dishes, we opted for the Oven-roasted Sea Bass (220LE) and the Grilled Beef Fillet (220LE). 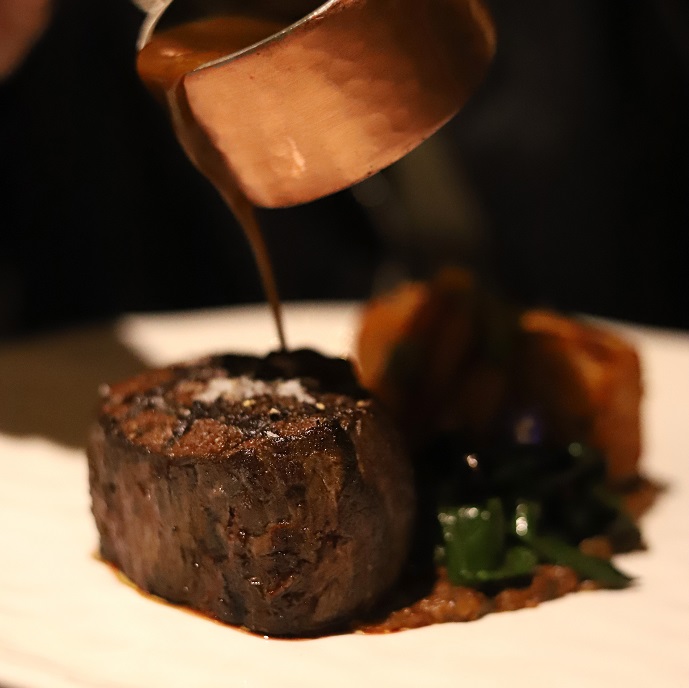 Well-seasoned and perfectly medium cooked, as requested, the beef fillet arrived on top of a layer of shiitake mushroom puree: the puree’s intense and earthy flavour proved to be the fillet’s perfect partner. As per the sides, the smoked cheese potato terrine proved to be a bit bland, while the sautéed vegetables helped lighten up the dish. Overall, the dish reflected a well-executed version of a classic, especially with its delicious pepper sauce. 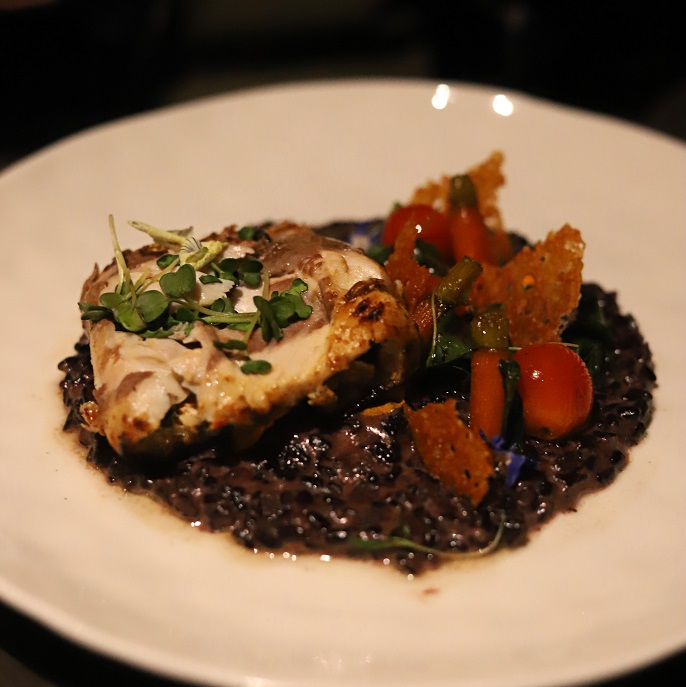 Meanwhile, the sea bass was a showstopper. Arriving on a bed of rich black rice risotto, the tender and flaky sea bass was stuffed with a mixture of vegetables, and was garnished with Parmesan crisps and edible flowers. All this, made this dish a great companion to the creamy lemon and dill sauce that arrived with it. Equally interesting, the risotto had a unique grainy texture, thereby adding a kick of texture to this main course.

We concluded our meal with orders of White Chocolate & Coconut Semifreddo (90LE) for our dessert , and a cup of tea (40LE) and a Passion Fruit Mint Cooler (55LE) for our drinks. The cooler’s portion was huge, possessing a rich flavour; a flavour that was complimented well by the sour kick, arriving from the sumac coating glass’s rim. As for the tea, the waiter arrived equipped with a box possessing an array of flavoured teas for us to choose from, before serving it in an elegant, all-black tea set. 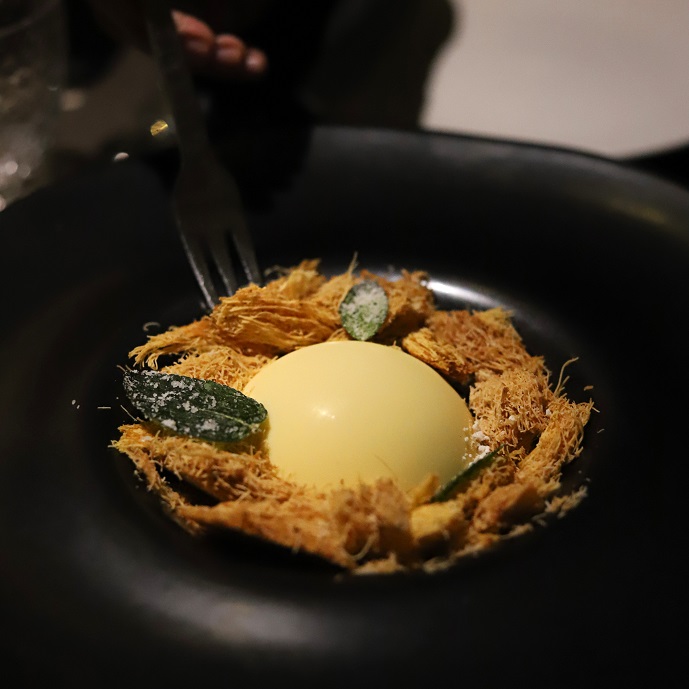 Using crispy crumbs of konafa that were circularly placed around a white chocolate shell that was itself coated with sobya-flavoured mouse and candied pineapples, the dessert shape resembled a bird’s nest . The dessert was also garnished with mint leaves and lemon snow. The sobya mousse teamed up with the sour candied pineapples, and gave the dessert a unique pina colada like taste, while the lemon snow added a fantastic zing to the dessert. Although the white chocolate shell was a bit too thick, the dessert was simply delicious and creative.

With its high caliber of service, its elegant ambiance, and its creative and perfectly executed twists on classic dishes, ESCA has obviously managed to deliver a top quality dinner experience. The prices may be steep, but it’s definitely worth the experience.

You can make a reservation by means of an Instagram DM.

The sea bass dish, and the dessert were outstanding.

The limited range of main dishes.