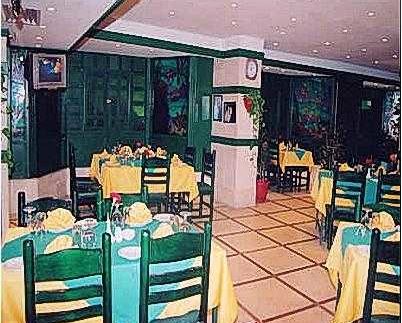 In the realm of populist Egyptian restaurants, Kastan in Nasr City is
often touted as one of the juggernauts. An import from the seaside town of Port
Said, Kastan relies very heavily on its reputation, and not at all on the
quality of its deliverables. Perhaps in Port Said the food and service is
better, but in Nasr City, the mark is not only missed; but intentionally
avoided altogether.

The Nasr City branch is huge: two entire floors of an apartment building
are dedicated to seating hundreds of people at a time. At the time of this
review, both floors were jam-packed with patrons tucking into mounds
of seafood. As for the decor; if Kastan had a flag, it would
be green and white. By far the most shocking sight was the promotional posters
for the new album by Mahmoud Kastan, a clone of Tamer Hosny and scion of the
Kastan clan. Adorning the walls are photos of the owner with various
celebrities and notaries.

The restaurant’s waiters are a small army, of which the lowest ranks are
occupied by adolescent waiters bedecked in lime green finery.

Kastan’s menu options are nothing out of the ordinary; locally available
fish and shellfish are all offered in two ways: grilled or fried. we opted for
the fried white fish, fried jumbo prawns and a special of sole cooked with
lemon and butter all supported by the usual Egyptian salads and a tray of brown
rice with mini-shrimps. The rice arrived stone-cold; the complimentary bread
basket was recycled from another table, which was made clear by the greasy bite
marks on the loaves of bread hidden from view.

The fried seafood options all tasted of over-salted and oil-soaked
flour. The sole cooked in lemon and butter was probably the saddest plate of
food ever conceived. If the fish were still alive, it would commit suicide out
of embarrassment. A singular fish sat on a bed of par-cooked potatoes in a
beat-up iron skillet, and it lacked any flavour worth noting.Yes, there was a
light hint of raw lemon but only on one side of the fish, informing us that
this poor fish was cooked in the oven with no seasoning, and the butter and
lemon juice were sprinkled on only after the cooking was finished.

We could go on and on about how bad it was; relate further tales of how
the head waiter snapped at us when we asked if there was Pepsi or that it took
30 minutes for them to bring us our check, while the wait staff were clearly
more interested in making loud obscene jokes in front of the patrons than
serving them.

We could even go so far as to complain about the prices, which
are far too high for food this bad (the final bill reached 250LE for two
people); but no, we won’t say anymore than the simple recommendation: for fish;
seek elsewhere.

Try the original in Port Said; at least the fish will be fresher.

The food, the service, the decor and the worryingly young waiters.