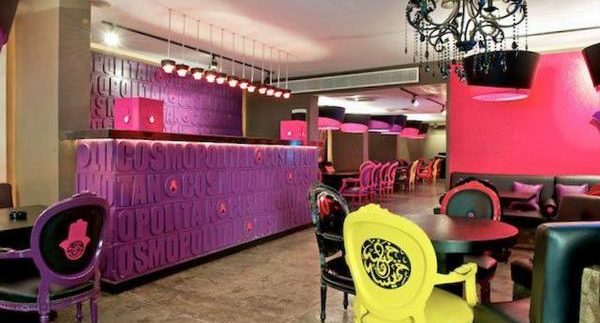 In an attempt to gain an edge over
ever-increasing competition, concept restaurants in Cairo have become the norm
and range from the intriguing to the downright ridiculous. There’s a thin line
between the two, and newly opened Mohandiseen restaurant Khamsa We Khmesa is
walking it like a tightrope. Located off of Lebanon Square, the self-proclaimed
‘cosmopolitan’ restaurant offers very distinct French, Italian, Thai, Egyptian
and Moroccan dishes across appetisers, salads, mains, desserts and drinks.

The interior is a mad mix of purple and
pink walls and huge photographs representing each cuisine. It looks more like a
club than a restaurant. After making our orders to the eager waiter, we were
swiftly presented with thin, crunchy, toasted bread and five pots containing
dips; each of which corresponded to the five cuisines. Egypt was represented by
a peculiar carrot and honey dip, whose two flavours were pretty indiscernible.
The Moroccan baba ghanough and bell pepper suffered similarly and lacked the
sharp bite and tang that the dip needs. The other three fared much better. The
French onion and mayonnaise dip was creamy and sharp and the Thai apple and
ginger dips was fresh and tangy. The pick of the bunch was the Italian spinach,
artichoke and basil dip which was thick and fresh, with every one of the three
ingredients having a say in the taste.

This all set us up nicely for our
appetisers; French onion soup (19LE) and Thai shrimp rolls (55LE). Though the
soup itself was perfect, the lump of bread topped with cheese that floated in
the middle of it caused more than a few problems. It was almost impossible to break
through the bread with the blunt soup spoon and it sunk further and further in
with every attempt before turning into mush. The shrimp rolls fared better; the
crunch complimented the well-cooked shrimp very well. Thank god for the sweet
chilli sauce that came with the dish though, because the shrimp itself didn’t
seem to be seasoned or marinated.

Encouraged by the shrimp rolls, we dipped
into the Thai section again for our main course in the form of the chicken
coconut curry (52LE). Using a pleasingly straightforward serving of steamed
jasmine rice (12LE) as the canvas for the curry, we found the chicken to be a
little overcooked and the sauce to be much thinner than it should be. Despite
that, the dish was full of flavour and was gobbled up pretty quickly.

From the Italian section, the size of the veal
scaloppina (79LE) dish was colossal. Three large pan-fried veal escalope pieces
were brought to the table with a handful of potato wedges. The veal itself was
tender and the breading was coarse and crunchy – an ideal combination. Both the
meat and the wedges were in desperate need of seasoning, but it was nothing a
bit of salt and pepper couldn’t cure. Overall though, the dish felt quite dry,
a condition not helped by the sheer size of it.

Dessert is limited to one option from each
cuisine and we plumped for a very French chocolate fondant (32LE). Served with
a scoop of ice cream, the fondant came to our table leaking warm chocolate goo
and was otherwise unremarkable.  We
toasted the schizophrenic meal with a bottle of the restaurant’s finest French
champagne (65LE), which translates to non-alcoholic, fizzy white grape
juice.  Though the juice was actually
quite nice, the idea of it as authentic French champagne is a completely
unnecessary extension of the five-cuisine concept.

In fact, the concept itself still doesn’t
sit well, because there’s a real danger that Khamsa We Khmesa becomes a jack of
all cuisines, master of none.

‘Vino’ (that's red grape juice to me and you) is also available at 65LE a bottle.

Plenty of well-thought out options.

Still in its soft-opening phase, the food has some kinks to iron out.