L’Asiatique: Catch up with Friends over Sushi in Zamalek 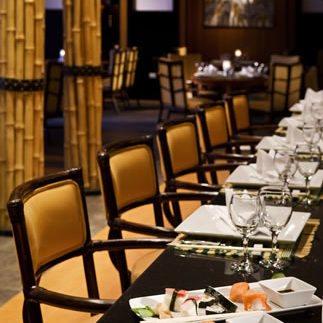 The thing about L’Asiatique on Le Pacha boat in Zamalek is that while it offers nothing unique to the Asian cuisine scene, it has the unequivocal ability to bring people together. Now this may sound cheesy but it’s true. As one of the oldest restaurants to serve Asian fusion in Cairo, it isn’t just the food that has people coming back over the years, but also its inherent charm that allows dinner as a group to be intimate.
Located on the lower level of the boat, across from Piccolo Mondo, L’Asiatique is warm with a predominantly wooden interior, sparked with accents of deep purples and reds. The lighting is hushed and the serenity is palpable; most of the tables are set up for groups of four and up, however smaller tables can be rearranged or you can choose to be seated at their bar.
Being a larger group, we were seated at a table built into the ground, where your seat is at floor level. While the idea is great, it most definitely isn’t the most suitable arrangement for Egyptian service – in kneeling down to serve, the waiters tend to lean into your space – or for those with less dexterity.  But nonetheless, the novelty of it can be amusing.
Their sushi options are extensive; a platter of either 12 or 24 pieces will cost between 100LE-200LE, and while the fish is fresh and the ingredients up to standard, L’Asiatique falls into the trap of cutting the pieces too big.

The shrimp bonbon (52.9LE) is appropriately shaped like candy; filo pastry is wrapped over shrimp, tied with a seaweed ribbon and served with sweet and sour sauce. The pastry was firm to the bite, the shrimp soft and the sauce well matched. The tuna tempura (63.9LE) was probably a highlight of the meal. Strips of tuna with a slight outer crisp retained their moisture and were served on a superb lemon sauce.

The Pad Thai spring rolls (43.9LE) come larger than average, covered in a medley of sweet chutneys. Stuffed with Pad Thai, this dish is more of an acquired taste because of the sweetness. But with a nice crunch to the roll and a tasty stuffing, it is easily a favourite.

The egg noodles with vegetables (24.9LE) comes in a portion suitable for sharing; flavourful and prepared in good proportion, neither the vegetables nor the noodles outshine one another. The beef teriyaki (72.9LE) comes in strips, and similar to the tuna tempura, was lightly charred yet tender – complementing the distinctive sweetness of the teriyaki sauce.

Other dishes worth trying include the shrimp dumplings (58.9LE), cubed aubergine starter and the Tataki salad – salmon sashimi and avocado in a light soya dressing.

Last, but most definitely not least, are the desserts. Now the nice thing about Le Pacha is that you can order from the same dessert menu regardless of the restaurant. The Mont Blanc (27.9LE) – two pieces of meringue stuffed with whipped cream and chestnut sauce – is not for the light-hearted. Nutty and  creamy with a hint of chewiness from the meringue, you won’t be disappointed.

The date tart (25.9LE) comes with sliced dates over homemade pastry, warm out of the oven, with a scoop of vanilla ice cream on the side sealing its heavenliness. The dark chocolate brownie (24.9LE) was equally delicious, crunching slightly before revealing its smooth chocolate texture. The classic rich flavour matched with the coolness of the vanilla ice cream was to die for.

Next time you have a family dinner, a birthday or even a work obligation, L’Asiatique never fails to be a good choice.

Several dishes aren’t included in the menu, so be sure to ask your waiter about what else is available.