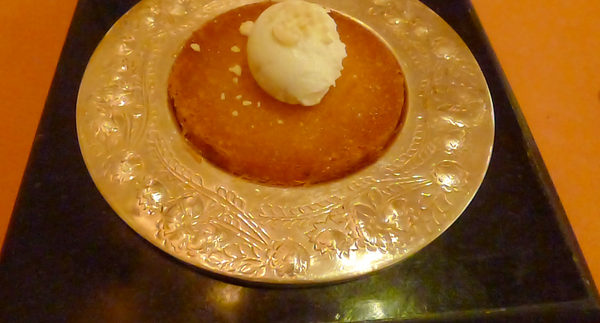 Having given it the perfect score back in
2010, the Cairo 360 team decided to venture back to Osmanly at the
Kempinski Nile hotel to see how well they’ve maintained their standard
over the past two years.

Located on the mezzanine of Garden City’s newest hotel, Osmanly
serves Turkish cuisine in a wonderfully serene atmosphere. Adorned in
terracotta shades and filled with effortlessly elegant furniture, the
restaurant offers a relaxing ambiance at a five-star level.

Greeted by a hostess, we selected a table and were offered a
cocktail to start off, to which we settled on a martini. The menus took a
bit too long to arrive, but beyond that hiccup the service was as close
to impeccable as Cairo can offer.

The vodka martini (95LE) was a profound
disappointment, though. Firstly, it arrived without olives and with a
rind of lemon – yes, lemon. It was swiftly returned, having requested
the appropriate garnishing and removal of the lemon. However, it was
already ruined and essentially tasted like watered down vodka, with
sweet lemon.

The salad was hearty and refreshing, filled with shrimp, calamari and
octopus. The bread was delicious and a perfect companion to the dips.
The amuse bouche was also quite tasty, though the melted cheese filling
could have been warmer.

The vegetable moussaka (90LE) was
absolutely divine. For a dish of diced vegetables, baked together and
covered with cheese, the presentation was commendable for a seemingly
messy dish. Served with white rice and labna, the vegetables had the
perfect consistency where they were soft, without being too mushy, and
offered flavourful bursts accented by the melted cheese. It was truly
excellent and could have easily been served without the rice.

Our
other main, kibrit kebab (150LE), was good but not as outstanding as
its counterpart. Sliced beef tenderloin, served with potato strips, pide
bread and garlic yoghurt, was a little on the dry side. While the beef
tasted very good, it lacked tenderness, while the potatoes could have
done with a few more minutes of cooking and the yoghurt only seemed to
add to the stodginess of the dish. However, the flavours were still
pleasing.

Ordering the konafa (40LE) upon
recommendation, we were not disappointed in the slightest. Presented in
an interesting dish made up of a small oven pan placed in a square slab
of heavy stone, the round konafa comes with a serving of clotted cream
and tasted like heaven. Filled with an unsalted cheese, the dessert was
warm, chewy, sweet and absolutely wonderful.
We also tried the pumpkin with tehina
ice-cream (40LE), which was quite sweet but masked with the nutty, and
almost salty, flavour of the ice-cream, it made for a rather interesting
adventure for the palette.
A pot of fresh mint (20LE) and an
espresso (25LE) accompanied our final course, where the latter was
probably one of the best we’ve had in town.

The service was very prompt and friendly; the unsatisfactory
martini was even taken off the tab. However, we did find that we were
charged for two San Pallegrino bottles of water (40LE), having had only
one.

If you're too full for dessert, pop down to the Chocolate Lounge and have a piece of spicy or mint chocolate instead.

The moussaka and konafa.