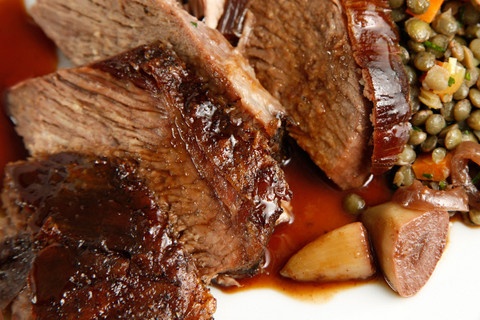 Seasons restaurant in Four Seasons First Residence likes to switch things up. Every day of the week, they offer a different buffet of cuisine; Italian, Seafood and Egyptian are just some of the choices; on Mondays they serve French cuisine.

Four Seasons needs no introduction and requires no approval. The five star hotel is sophisticated and grand, instantly transporting you to a world of riches and supreme service. Seasons is located on the third floor of the hotel and after winding through several plush corridors, we arrived at our destination.

The décor of the restaurant is basic – relative to the hotels standards, of course. We arrived later in the evening and so there weren’t many other diners at the time. While open buffets are not our preferred form of dining, walking past the display on the way to our table immediately had our eyes widening and our stomachs simultaneously rumbling.

For 250LE++, the buffet is at your service. The salad bar and appetisers were plentiful and in a nice variety. Apart from the basic lettuce, tomato and beetroot choices, they also served green beans with herbs, a salmon and red onion mix, Niçoise salad and a dainty shrimp cocktail cup. With a selection of different dressings and crunchy croutons, this part of the meal was light, fresh and tasty.

We were warned that the last order was at 11PM and so taking our leisurely time to eat wasn’t an option, which wasn’t a problem seeing as we still had forty minutes to go. However, when we got up for the main courses, to our surprise the little tags had already been removed from in front of the dishes – indicating meal time was over. What happened to our five star treatment, Four Seasons?

They served several meats which included roast chicken, duck with apples and leg of lamb; there was also a choice of grilled haddock as a lighter option. The lamb and chicken were freshly cut off the bone in front of you, while everything else was offered in a serving dish. Side dishes included roast potatoes, vegetables, rösti potatoes, rice and pasta with mushroom sauce.

The chicken was fused with roasted flavours, complemented with gravy; it was excellently cooked without a hint of dryness. The duck also escaped a dry fate and was succulent, matching the apples perfectly. The leg of lamb was equally satisfying, being soft and tender, without a trace of fat. Being lovers of potatoes, the roasted ones were satisfying but the rösti stood out with a crispy outer layer and a buttery hint in every bite.

Being almost too full, but not quite, we made our way over one last time for the desserts. Feeling as though we were Marie Antoinette at a tea party, we indulged in quite a few options. Don’t you just love a buffet of dessert? The cream éclair was sadly a bit dry and lacked the exquisite mush that characterises this cake. Meanwhile, the mini lemon meringue tart could have done with an extra zing and the crème brûlée was simply too sweet.

On the other hand, the pear and chocolate tart was rich with a lovely outer crunch, and the freshly made crêpe was warm, topped with a balanced chocolate sauce that wasn’t too overpowering.

Overall it was a successful meal; it is the Four Seasons after all. But removing the dishes’ description tags before we had served ourselves – even though there was still ample time – was noted, as was underwhelming standard of desserts. Paying a total of about 700LE, which included a glass of Egyptian wine (60LE), we would have expected the meal to be flawless.

Seasons offers a buffet of different cuisines every night of the week, including Italian, Mediterranean and Thai. For a full rundown, click here.

Beginning to clear up an hour before closing time.