2017 was a year that witnessed an explosion of new restaurants opening up everywhere around Egypt One of these newcomers to town is Spaghi: a Spaghetteria that opened its first branch at Al Guezira Plaza, located in Sheikh Zayed, and left us with mixed feelings.

As a venue, the restaurant possessed a predominantly white and red theme to it, with the occasional touches of wood; the latter element contributed a sense of warmth and coziness to the venue’s overall ambiance. The seating area was relatively regular, in terms of both its set up, and its furniture. Indeed, Spaghi possesses basic looking tables and chairs situated in the middle of the main dining area, and an array of couches that were attached and fixed to the walls. 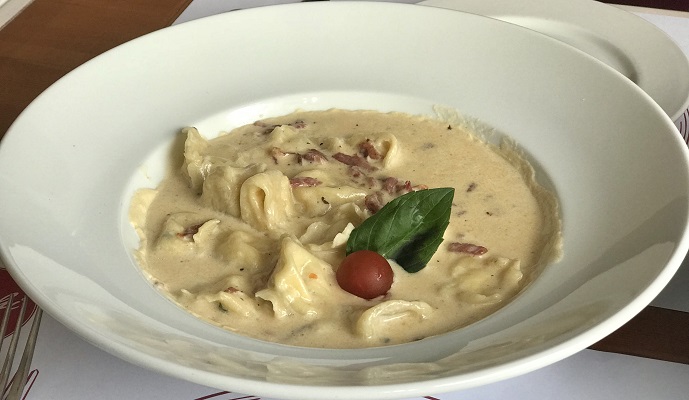 What helped elevate the seating arrangement a bit was the bar, more specifically the decorative wall behind the bar, which contained shelves that held aesthetically pleasing elements, namely a display of salsa bottles and uncooked pasta. We say it was aesthetically pleasing because it helped elevate the restaurant’s overall cozy feeling, and elevated the casually warm theme of the venue.

Spaghi describes itself, on its social media accounts, as a venue possessing an Italian cuisine inspired menu, with a special focus on pizza, pasta, and seafood. Their menu definitely does a good job of living up to all of the above, except maybe for the seafood part; there was only one kind of seafood pizza present in the menu, and only 4 out of a total of 15 pasta dishes possessed seafood related ingredients. 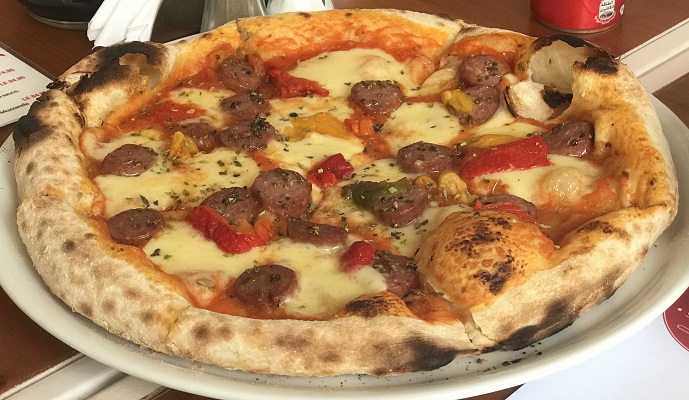 We skipped the appetisers and went straight to the mains. We ordered a Tortellini Sophia Loren (100LE), a Fettucine Di Popeye (90LE), and a Salsiccia D’Italia Pizza (85LE).

The tortellini pasta was stuffed with a blend of cheese, and was served swimming in a cream sauce alongside sun-dried tomatoes and bacon bits. The pasta was perfectly cooked, and its sauce was well seasoned. The sun-dried tomatoes added an intense flavour and unique sweetness, which especially complemented the smoky flavor emanating from the bacon bits. We have to say, however, that the overall presentation of the dish was quite sloppy, and a tad unappetising.

The second pasta dish – the Fettucine Di Popeye – gave us fixed feelings. The concept behind the dish itself seemed interesting to us: the idea of paring up caramelised walnuts with Gorgonzola sauce in a pasta dish containing spinach presents itself as a fresh concept. Upon trial, there were some things we absolutely loved about the aforementioned interesting paring, and some things that could be improved. We particularly loved how the nutty sweetness of the walnuts complemented the rich creamy sauce, and how the sautéed spinach helped lighten up the creaminess of the sauce.

The pasta itself, however, was unevenly cooked, and the pasta pieces themselves were inconsistent in size. Moreover, the Gorgonzola sauce did not do a great job at serving up to its own name; it could have benefited from possessing a more Gorgonzola like flavour, rather than possessing the tortellini cream sauce flavour that it did in reality possess. Finally, the caramelized walnuts were a bit more brittle in texture than required for this dish. In other words, while the dish did sound wonderful on paper, it requires a bit more care when it comes to the execution of some elements. 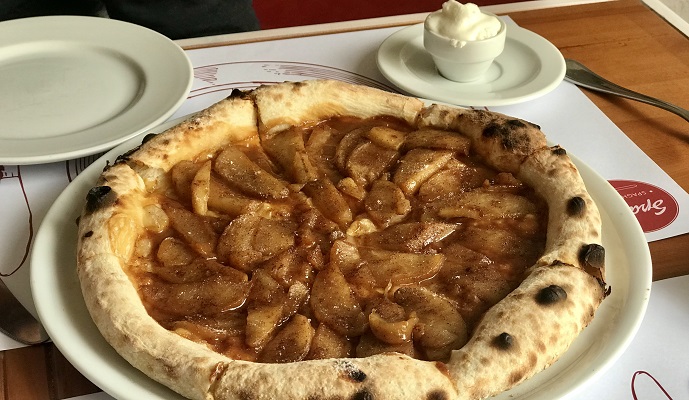 As for the pizza, the wonderfully puffy dough was topped with tomato sauce, mozzarella, bell pepper, and slices of Italian sausages. Despite that the Neapolitan pizza dough was flawless and there was a generous amount of cheese, we felt that the sprinkle of dried herbs was a bit overpowering in terms of flavor. Furthermore, while the menu had indicated that the sausage would be Italian, quite honestly the sausage tasted just like any other regular sausage would.

This pizza confusion, however, was cleared up upon our first bite of the dessert pizza: the Pizza Caramella Con Mela (70LE). We have to say that this was our favourite item. The dessert pizza possessed the same delicious and fluffy pizza dough, possessed by the Italian Sausage pizza dish. The dessert pizza was topped with apple cinnamon and caramel sauce, and was served with a side of whipped cream. We loved the fact that this dessert dish did not fall into the trap of being overwhelmingly sweet, nor fall into the trap of serving apple cinnamon that was mushy in texture. This dish is actually a new and cool pizza and apple pie hybrid.

Conclusively, we left Spaghi with mixed feelings. While we think a venue specializing in pasta and pizza is wonderful for a place like Sheikh Zayed (a place which lacks such venues), we were expecting a bit more from a Butcher’s Burger and Chicken & Ribs sister company restaurant. All in all, we feel the place did alright for a soft opening, but we anticipated more than just alright.

Wait for the grand opening.

Some dishes were poorly presented.