A Dangerous Method: The Birth Of Psychoanalysis 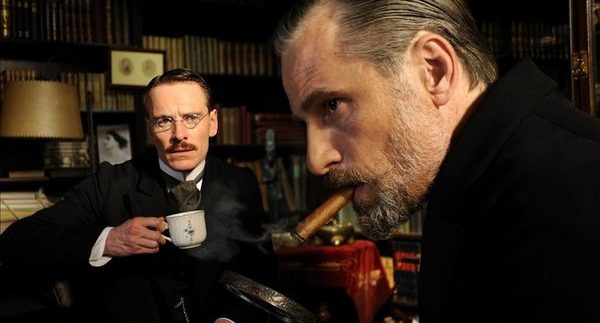 This
is a film chronicling the relationship between the two titans of psychoanalysis:
Sigmund Freud (Mortenson) and Carl Jung (Fassbender), and the woman that
brought them together – Sabina Spielrein (Knightley).

Jung
has just started putting Freud’s theories of psychoanalysis to the test,
theories that even Freud hasn’t tested yet, when a patient by the name of
Sabina Spielrein comes his way. Under his care, she’s able to get over the
sexual and psychological scars inflicted on her by her father’s beatings. As a
guinea pig, it’s her case that brings Jung and Freud together and gradually
this reverent student/mentor relationship starts to sour. Jung wants to open up
the field and explore more metaphysical aspects while Freud clings to its core
beliefs in an effort to have this fledgling science taken seriously. Their
relationship is tested even more when Jung starts an affair with Spielrein, who
is now studying psychoanalysis and is showing great promise; favouring Freud’s
ideas over Jung’s.

Acting
wise, the film takes a while to hit its stride. Keira Knightley is rather
difficult to recognize, disguised by her hunched posture, gloriously weird
facial tics and bugging eyes. The things she does with her face are rather
formidable and quite scary. Her character calms down considerably though after
Jung treats her and she relaxes into being a less neurotic character and a
highly respected psychoanalyst in her own right. She’s the most exciting thing
about the film and the only character with an aura of unpredictability around
her.

Freud and Jung in contrast are stodgy and stiff, though Mortenson and
Fassbender do a great job of showing the dynamics of their relationship
and the curve that it takes. Their relationship starts off with a star-struck
Jung reaching out to Freud; Jung soon becomes Freud’s star pupil who then
rebels when he starts to feel confined by Freud’s lack of imagination. It’s a
classic rebellion-against-authority subplot but instead of emphasizing
the split in their relationship, the film chooses to showcase the hurt and
abandonment that they both feel as a result.

The
film was adapted from a play that was initially based on a book and its theatre
background is rather evident. The film has a static feel to it partly because
it’s heavy on the dialogue but also because of the camera work. It feels weighted,
there isn’t much movement to it and the score is quite sparse and doesn’t inject
much life into the proceedings either.

More
a romance and study of power than a history of psychoanalysis, the film manages
to be reasonably entertaining and very well acted, though psychology buffs will
probably find themselves wishing for more substance to the storyline.

My Name Was Sabina Spielrein, The Soul Keeper, Good Will Hunting

Christoph Waltz was the first choice for Freud but he dropped out to do Water For Elephants instead and Keira Knightley’s role was originally intended for Julia Roberts.