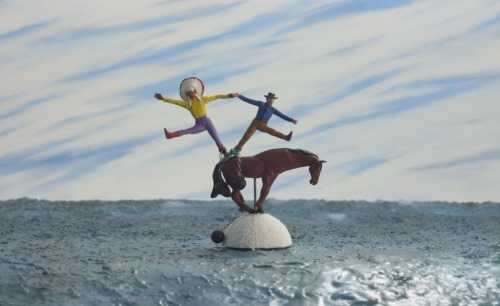 It
takes a lot to make the animation in Fantastic
Mr. Fox look comparatively slick and polished. Even the cheap stop-motion
of Adults Swim’s Robot Chicken can’t
match the crudeness of A Town Called
Panic. However, what the film might lack in sheen and gloss, it makes up
for in the cute and charming department. This little Belgian clay-animation
packs an admirable measure of sheer joy joy into the course of its 75-minute
running time.

The
town of Panic
exists in a child’s uninhibited imagination. It’s populated by toy figures that
are still attached to a base (like those green toy soldiers). The tale centres
around three toy friends: a horse, a cowboy and an Indian. Horse is the most
responsible– compared to the not-so-bright Cowboy and Indian– and he assumes
the role of their guardian. On the other hand, Cowboy and Indian spend their
days avoiding– unsuccessfully – getting into trouble. Other characters reside
in the town of Panic ,
including a policeman, a postman and a farmer; kind of an unintentional and
surreal parallel to the Village People.

The
catalyst of their newest adventures arrives when Cowboy and Indian find out
that they’ve forgotten to buy a present for Horse’s birthday. In haste, they
decide to build him a barbecue stand and accidentally order 50 million bricks
for the job. They don’t know what to do with all the excess bricks; so they
just rack them on top of their house, and come night-time, the weight of these
bricks brings the house down. Now they have to rebuild the house from scratch; but
again, this simple task proves to be more challenging than it at first seems.

All
efforts fail miserably, with an outlandish domino effect, causing situations to
become ever more ridiculous. Even though the three toys end up in unexpected
places, their adventure never fails to be highly engrossing.

A Town Called Panic is not concerned with
telling a cohesive story or teaching a valuable lesson. It’s more of an
exercise in lunacy that goes far in its weirdness.
The manic inventiveness is the main attraction here. The animation’s visuals are
stylish and truly amazing; and although the character design is primitive, the
clay cast emotes feeling without needing to change so much as a facial
expression.

Much of the humour in A Town
Called Panic is visual: Horse goes to bed, but not before taking his shoehorns off,
and when he does get into bed, he just stands on top of it. Clever jokes like
this occur frequently throughout the film, not in the same volume as in Toy Story;   but there is nonetheless something special
about this charming and innocent little film.

It took the animators 260 days and 1500 plastic toy figures to bring the film to life.