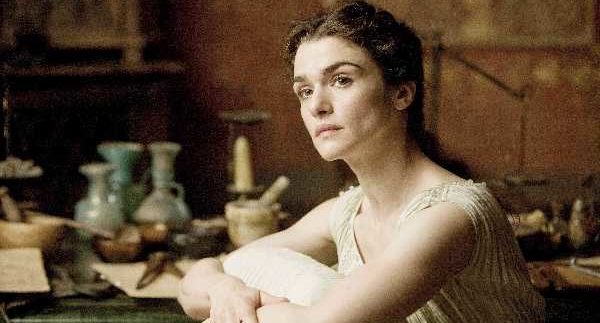 The Egyptian city of Alexandria as depicted in Agora is almost unrecognizable. Save for
some artefacts left behind from the Roman Empire,
there aren’t many visual tie-ins to the city’s current-day landscape. It’s a
testament to Alexandria’s
metamorphosis through the different time periods and the shifting ideas that it
propagated. During the 4th century, the Mediterranean city was the cultural
home for Roman’s great philosophers and thinkers. Students sought it to learn
amidst its great library and revel with all the other free thinkers.

Among the scholars that prospered
on Egypt’s
seashore was Hypatia (Weisz), a beautiful woman that taught philosophy,
astronomy and showed her students the power of free thought. The sands
start shifting, and the largely pagan empire starts to crumble under the
upcoming reign of Christianity. Hypatia’s
tutelage favours questioning as opposed to submission; a venomous idea that prevents
people from submitting to the new faith. Slowly, proponents of Christianity
turn against her and the rest of the pagans left in Alexandria .

The first half of the film documents
the pagans’ downfall and the end of classic Antiquity. Then the film skips eight
years ahead, to when the Roman Empire has become predominately a Christian
one. There is religious tension brewing between the Christians and the Jews,
but there is a bigger threat: Orestes (Isaac), the governor of Egypt, pays great
attention to Hypatia and her ideas. He
even proposed to her publicly almost a decade ago, only to be turned down by
the celibate philosopher. Hypatia is oblivious to the magnitude of the danger
looming over her; she’s lost in her own world trying to prove that the earth is
a sphere.

As mesmerising as this
sandal-drama looks on screen, it struggles to keep the audience’s attention. Much
like the men in the film, Agora falls
in love with its philosopher, gazing at her beauty and following her around
during her astronomy pondering sessions. Hypatia is not a human of flesh and
blood; she’s more of a vessel; an elegant and fragile being encompassing all
the good from a time long bygone, which Weisz captures with an arresting and
graceful performance.

A great deal of attention
was given to reconstructing ancient Alexandria.
When the camera hovers above, we can see all the luscious details. However,
this level of complexity is not to be found in the plotline itself. Parables to
our current time are obvious and on the nose. And with the back and forth
banter, it’s hard not to find that the core of Agora is anything but shallow.

There are personal moments
in Agora that bring some emotional
intensity; but in between, we’re left in a plodding world wondering why these
sword-carrying Romans aren’t fighting an epic battle.

Sacha Baron Cohen was approached to appear in the film but he turned down the offer, claiming that the film was 'too prickly, and it would lift sores'.