Being Elmo: A Puppeteer’s Journey

Being Elmo: A Puppeteer’s Journey: The Man Behind Elmo 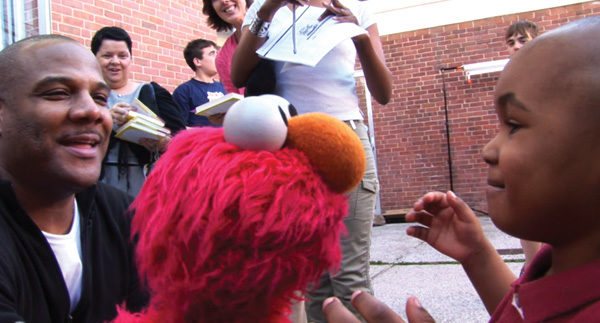 When you think of the Muppets, you think of Jim Henson. It’s rare to come across a person who hasn’t heard his name before or who can’t name at least a couple of his most famous characters. Less famous but pretty influential in his own right, is Kevin Clash; one of Henson’s protégés, the puppeteer in charge of Sesame Street and the man behind one of its most beloved characters: Elmo.
Elmo was on Sesame Street before Clash joined the show, but he wasn’t the smiley, loveable puppet we know today. Elmo used to be a caveman with a gruff voice and it’s Clash who turned him into the personification of love; arguably the show’s biggest character and definitely the one that sells the most toys.
The documentary traces Clash’s career as a puppeteer from the day he made his first puppet out of his father’s coat until the present day as he jets around the world training various puppeteers for the international versions of Sesame Street. Even though the film is focused on Clash, we also get to learn quite a bit about the art of puppetry, such as how the puppets made and how their puppeteers come up with personalities and voices for them. You learn to appreciate just how talented these people have to be in a variety of different ways. We also get a sneak peek at the Muppets workshop which is filled with drawers upon drawers of different types of fur, different shaped noses, moustaches and eyes; you name it, they have it.
Stylistically speaking, the film is as simple as you can get. At first, it’s pretty underwhelming as Clash and his parents recount his childhood and how he first got into puppetry. The film kicks into gear as various puppets begin to enter the equation. Clash comes alive whenever he talks about them; he suddenly becomes far more animated and his love for the art is infectious. However, none of them have as powerful an effect on him as Elmo does; he put so much of himself into the character and it comes across loud and clear on screen. There’s something highly positive and uplifting about Elmo that makes you break out in a huge grin – a quality Clash shares with his creation.

The film is quite short but incredibly joyful. It’s a reminder of the people who affected our childhood so much and whose art form is being left behind in the age of Pixar and Dreamworks. Everybody knows how difficult computer animation is so it’s nice to watch a documentary that reminds you that even the old fashioned way of doing things isn’t exactly a piece of cake and is pretty awe inspiring in its own right.

Clash worked on Labyrinth, the 1986 film in which David Bowie starred as the goblin king with Jim Henson.