Diary of A Wimpy Kid

Diary of a Wimpy Kid: It’s not a Diary, It’s a Film 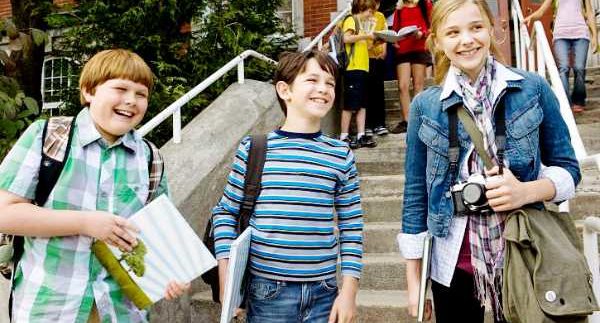 Diary of a Wimpy Kid is the kind of film that you’d wish you had seen when
you were twelve. Its spasticity captures the extremist mindset of a young boy,
where the smallest problem can be inflated into the direst of life-or-death
situations. The film does this through the upbeat and good-natured chronicles of Greg
Heffley (Gordon), the wimpy kid
in question.

The stick-figure
drawings on which the film was based work well as animation and spastic characterisation. Heffley, his family and friends don’t come across as
real people; even kids won’t be fooled by them. However, the lively window that the film
opens is enchanting and filled with middle school flair, making it nonetheless enjoyable.

Heffley is a kid
with grand delusion about the magnitude of his own awesomeness. He is jittery
about starting middle school and has set his mind on becoming one of the cool
kids. Heffley’s selfish quest finds him pulling one stunt after another to gain
attention, but the kid’s fleeting grasp of his own reality leads him in the
opposite direction. Instead of climbing the ladder of popularity, Heffley fumbles
again and again, slipping into the pit of humiliation. He even abuses his best
friend Rowley (Capron) to get his way. By the end of the film, he’s left alone with
nothing to face but his own vanity.

At times, Diary of a Wimpy Kid falls victim to its own childish outlook,
throwing   fart and booger jokes to secure
some easy laughs; yet the film balances the juvenile outbursts with some cross-crowd
appealing hilarity. Not to say that the film works on any mature level; this is
the cinematic equivalent of a loopy brat on a sugar high.

The moral centre of Diary of a Wimpy Kid doesn’t get in the way of its turbo-driven, colourful
story. There is no spoon feeding here, no pauses to recap the lessons learned. Even when Heffley gives his final revelatory speech; it’s met by jeers and
boos. Both cynical and reaffirming , this film is fun, funny and
heartfelt; s a charming family
flick that we can all enjoy.

Gordon is gearing up to reprise his wimpy kid role for the sequel, which will be released next year.