Exit Through the Gift Shop

Exit Through the Gift Shop: Examining Our Preconceptions about Art 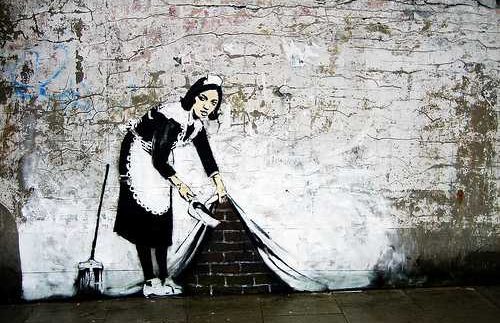 With
Exit Through the Gift Shop, iconic street
artist Banksy has crafted an elusive documentary that comes under a cloud of
speculation. Whether or not this is another hoax by the master prankster or an
honest account is beside the point; Banksy isn’t a news reporter nor is this
documentary an investigative piece for 60
Minutes.

Exit Through the Gift Shop
ostensibly makes you confront your own perspectives on the value of artistic
expression and authenticity, a feat that this thought-provoking film manages effortlessly without relying on hyperbole or grand gestures.
Fans of Banksy, graffiti lovers and casual views alike are all in for a treat.

Exit Through the Gift Shop starts with a shadowy
Banksy proclaiming to have originally set out to document his own journey until
he realised that his documentarian Thierry
Guetta is a much more fascinating subject. And it’s true; Guetta is intriguing.
A French man who immigrated to American in the late eighties to open his own
vintage clothing store in LA, Guetta is a unique individual who seems to be inseparable
from his camcorder.

Guetta has an unrelenting
obsession with capturing every single moment of his life, and this obsession is
a means unto itself. Originally, Guetta had no plans beyond capturing the
monotony of his everyday life and then stacking the tapes away in boxes. However,
in the late nineties he stumbled across street art subculture; and that
captivated him even more than videotaping endless hours of mundane footage.
Guetta grew to be a fixture in the street art scene, and when asked why he was constantly
taping; his reply would allude to a sweeping street art documentary that he was
working on.

As
the documentary continues, it shifts focus from Guetta’s own footage to the man himself. There is more to the film than
capturing Guetta’s neurosis, though , like Banksy’s work, his film challenges prevailed
constructs of the medium and its merits. It lashes out, defying argument and
deconstructing itself in the process.

By
the end of the film, Banky’s former art dealer wonders about the purpose or the
sense in all the madness of Banksy:  ‘The
joke’s on … well, I’m not sure who the joke’s on,’ he says. ‘I’m not even
sure there is a joke.’

Bomb It, Scratch, F is for Fake

Banksy allegedly makes a cameo appearance in the film as a passer-by commenting on his work.