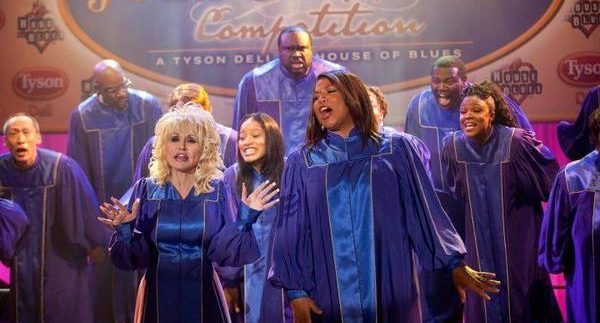 Lovers of awful, cheesy films unite. Here’s a film that combines Dolly Parton, Queen Latifah, Glee style mash ups, a two-hour run time and some cringe -inducing dialogue. It should have been deliciously awful but unfortunately it doesn’t fit into that ‘so bad it’s good’ category. If it hadn’t been for the final two performances, the film would have been plain unbearable.

The local church choir in Pacashau, Georgia come in second at the regional competitions every single year. Luckily for them, though, their main rivals are disqualified and they get a chance to compete at the nationals. G.G. (Parton), the church’s main benefactor, and Vi Rose (Latifah), the choir leader, have to put aside their rivalry and turn their choir into a serious contender for the national title. Vi Rose wants to stick to their tried and tested choir staples, while Randy (Jordan), G.G.’s troublesome grandson who happens to have a thing for Vi Rose’s daughter Olivia (Palmer), wants to freshen things up with some reworked pop songs and choreography.

The film is pretty melodramatic due to the number of problems that the characters have to rise above. Vi Rose alone has to deal with an absentee husband, a son with Asperger’s Syndrome and a daughter who says stuff like “You hate me because I’m pretty.” It’s the stuff of soap operas which even the lacklustre visuals seem to emphasise.
The cheese here is delivered in spades. The dialogue is unintentionally hilarious – or maybe it’s intentional, it’s hard to tell. Palmer gets the worst of it, whether she’s flirting with Randy or arguing with her mum; either way it’s cringe-worthy. Parton, who is a widow in the film, has a song and dance sequence with her late husband played by a frozen faced, croaking Kris Kristofferson. The scene brings the already flagging production to a complete standstill and it’s only Parton’s general awesomeness that’ll keep you from abandoning the film.
Things pick up considerably, though, in the last third of the film, which is when they reach the nationals and pull out all the stops for their performance, though ‘all the stops’ here means a performance that would have been perfectly at home on Glee.
When it comes down to it, you’d probably be wiser to stick with Glee. You get roughly the same amount of musical numbers, equally melodramatic storylines and hammy acting in less than half the time. Besides, if you’ve stuck with Glee this far, you’ve already got the cheese tolerance to sit through this film.

Among the songs covered by the choir are numbers by Michael Jackson, Paul McCartney, Sly Stone and, most disturbingly, Usher’s 'Yeah' with it’s lyrics changed to be more religiously appropriate.