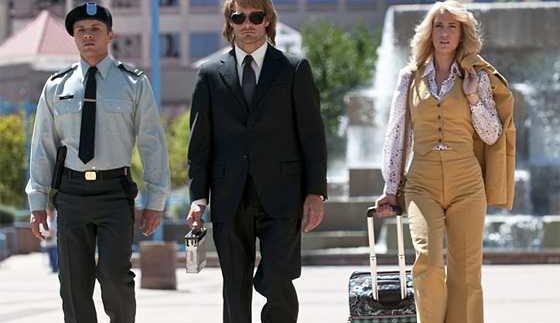 If MacGruber were a food, it would be
one of those new ice cream cones with a Kit-Kat finger in the middle.
Separately, both are high caloric and delicious desserts. Combined, the result is not
quite the sum of its sweet parts.

MacGruber
is the same; it has Saturday Night Live funnymen combined with the already
ridiculous tropes of muscle-action films. Theoretically, this is a recipe for
non-stop laughter; in practice, it’s not quite that.

Forte plays the mullet-boasting
action hero made famous by a series of sketches on SNL. On the hit show, the
skits traditionally followed a rigid 30-second formula where MacGruber has to
diffuse a ticking bomb before it goes off, only to waste these precious few
seconds by making margaritas or something equally mundane. However, in the film,
the character is less of a one-trick, bomb-diffusing pony, and more of a
satiric take on self-assured 80s action heroes.

The film starts with MacGruber in seclusion. After losing his wife to a bomb
planted by his nemesis, Dieter Van Cunth (Kilmer), MacGruber decides to leave
his old life behind him and retreat to an Ecuadorian monastery. Dieter Van
Cunth gets his hand on a nuclear missile and MacGruber gets called back for one
last mission; a chance to finally avenge the death of his wife.

MacGruber takes on the
job after resisting for a few scenes, and then he goes about assembling his
macho team ( mostly consisting of ex-WWE wrestlers) while listening to tenuous
80s hits by the likes of Boston. It’s silly all the way through in quite a
hilarious way; yet something is lacking. The film’s commitment to the action
structure comes at the expense of the comedy.

There are little funny
nods here and there, and these mostly sustain MacGruber, yet the film never gets as absurd as the 80s action
films that it’s making fun of. There are
a few set pieces where Forte’s straight-man routine pays off, and together with
Kristen Wiig– herself the ice queen of the straight-man routine– provides a lot
of silliness, which is perhaps the best that can be said about this film.

Some say that a film
is as a good as its villain, and in this case, the villain is a deliciously
played by Kilmer, who is the physical incarnation of pointless villainy. Not
only is he willing to give his opponents a detailed outline of his plans before
shooting them, he also shows them his paintings and has a cup of tea to catch
up on lost time. Stupid, yes; but isn’t that the point?

Writer-Director Jorma Taccone is part of The Lonely Island trio responsible for SNL Digital short classics such as ‘D*** in a Box’ and ‘I’m on A Boat’.