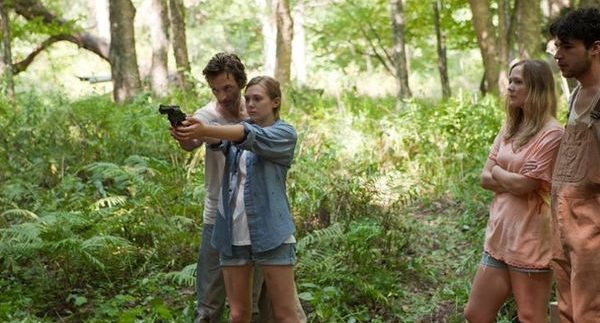 After losing her mother, Martha (Olsen) ended up being lured into a
cult. She lived with a bunch of people in a remote house with almost zero
access to the outside world. The cult was presided over by a man named Patrick
(Hawkes) who was something between a god and a mentor to the people in his
thrall. He would take them under his wing, give them a sense of purpose and
belonging, take over their brains and indoctrinate them into his way of
thinking. He would also give each person a different name which is how Martha
came to be known as Marcy May. After being exposed to some of the less savoury
sides of the cult such as rape and murder, Martha escapes and calls her sister
for help. Lucy (Paulson) and her husband, Ted (Dancy), take Martha into their
home and try to discover the depths of her problems, about which she refuses to
utter a word, in an attempt to rehabilitate her.

The film’s editing gives us some insight into Martha’s mind. In her
troubled state, the slightest sound or action can bring back related memories
from her time in the cult. The film goes back and forth between Martha’s time
in the cult and her time at Lucy’s house as she connects little incidents in
the present with similar happenings from the past.

Elizabeth Olsen, sister of Mary Kate and Ashley, is fantastic as Martha
both in the throes of her problem and during the first stages of her recovery.
To the first, she brings a wide-eyed innocence, like a child searching for
someone to emulate and validate her existence. While recovering however, she
acts as a person physically trying to outrun a problem only to have it loom
threateningly in her thoughts. She’s scared and sees the cult members
everywhere; even in the most innocuous of places.

The film has a very ambiguous ending, heavily implying that Martha will
spend a decent chunk of her life looking over her shoulder, expecting to be
found at any moment. As serene as the image on screen is, the film still
manages to be thoroughly chilling.

Cults make for fascinating film subjects. You watch them with a mixture
of revulsion and pity blended with a perverse quality that keeps your eyes
glued to the screen even when you’re hyperaware of just how wrong and messed up
this kind of thing is. As humans, judging others for their choices comes all
too naturally to us and so the film takes special pains to highlight exactly
why Martha was so easily hooked and why she was especially susceptible to
Patrick’s way of life as well as why she became not just a recipient of
maltreatment but willingly doled it out as well. The result is a deceptively
small and quiet thriller that has a lot more to it than meets the eye.

Martha Marcy May Marlene was a Sundance hit, scoring two standing ovations and a directing award.