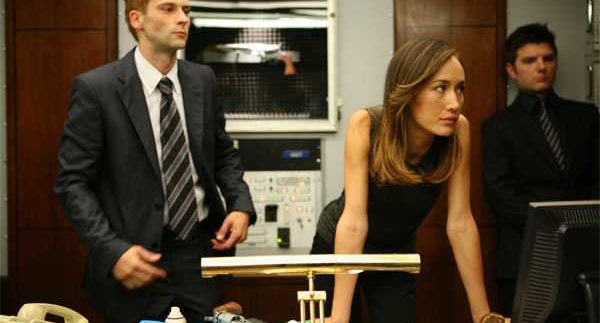 If spy films were a family, Operation:
Endgame would be the quirky younger cousin that likes setting fire to ants. She
can be funny as hell, if only because you’re laughing ‘at’ her, and not ‘with’ her.

The plot is pretty simplistic, and is set up in the first fifteen minutes
of the film: the US
government has two spy teams: Alpha and Omega. One is tasked with starting
wars; the other is tasked with stopping them. When the heads of both teams are mysteriously
assassinated, a protocol called ‘Operation: Endgame’ is put into effect, locking
down the subterranean facility with the goal of the eventual detonation of a
bomb that will wipe out both teams.

Many of the ensemble cast are known for providing hilarious supporting
roles in more mainstream films, most notably Rob Cordry (Hot Tub Time Machine), Zach Galifinakis (The Hangover) and Ellen Barkin (Ocean’s
13). However, there are at least
another half-dozen actors that you’ll recognise. This can turn into a very fun
trivia game with a group of like-minded friends, but if you’re actually
watching the film, disappointment will set in at around the fifteen-minute mark
when the first recognizable face is unceremoniously booted out of the film.
More exits follow as the story takes a very bizarre turn from a darkly humorous
story to a sadistically amusing action film.

Despite the silly formulaic plot, the film has some very funny and
interesting elements. The entire aftermath of the director’s assassination is
watched by two very detached security surveillance personnel. Their comments
and side-talks are a welcome break to the intense skulduggery going on in front
of them and are reminiscent of cult US comedy series Mystery Science Theatre 3000; but
funnier and more involving.

Still, seeing Rob Cordry in an action sequence as a hard-hitting
alcoholic is a lot of fun, and it looks like he’s enjoying it. The same goes for
most of the other players in the film, with the exception of Mr. Galifinakis, whose
portrayal of a rogue spy leaves comedy far behind and steps into the realm of
the mentally disturbed.

The movie is good if you’re not big on plots, and if you enjoy watching
ensemble casts beat the ever-loving crap out of each other on-screen. Grab some
popcorn, soda and initiate Operation:
Endgame.

The film is the first mainstream film project by Lebanese director Fouad Mikati, whose shorts credits are limited to an even shorter film and many TV commercials for Arab TV stations.