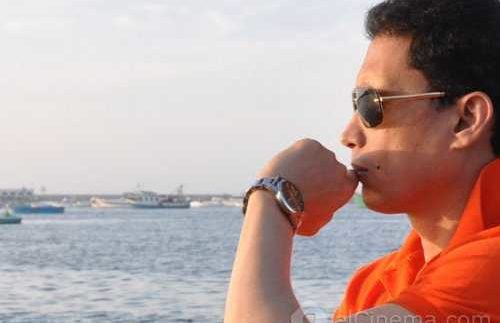 There is no respect for
character actors in Egypt. If a talented actor doesn’t have his own movie or TV
show, he gets questioned about it in talk shows and interviews. It’s as if starring
in your own vanity project is the epitome of art. As a result, acclaimed (and
even up-and-coming) actors have grown excessively territorial, refusing to
share credits with their peers unless it’s someone from the opposite sex or
goes by the name of Hassan Hosny. That partially explains the ridiculous amount
of serials produced this year with little regard for quality.

Azmet Sokar (Sokar’s Crisis) may not be the worst show on TV this Ramadan, but it is
the most contrived and shamelessly misinformed. The story is about Sokar (Eid), a simple village man that finds himself on
the receiving end of his late uncle’s enormous fortune. Not only does Sokar inherit
tons of money, but he also meets his four long-lost cousins, who have been
living in the US all of their lives.

The four cousins are
intriguing creations and are absolutely crass. The America that they came from
exists in the filthy imagination of a fat middle-aged cabbie. Named Cherry,
Berry, Magi and Lillian, the four divas introduce the naïve Sokar to the world
of nightclubbing and tacky outfits. Sokar then undergoes phase of adjustment, where
he tries to adapt different lifestyles to fit in more gracefully with his new
millionaire status. He dabbles in the world of emo music amongst other equally
misguided endeavours to catch up with his ultra-hip cousins.

The set-up of Azmet Sokar isn’t necessarily
problematic. A similar approach found in
numerous fish-out-of-water comedies like this month’s Al Kebeer Awi, what really kills any comedic momentum is the execution. The cast is composed of a lethal mix of
humourless clowns and meek drama queens, and the script resorts to exhausted
gags and lousy situations.

Director Ahmed El Badry
and writer Magdy El Kodsh offer a tasteless vision of a reality captured with
the enthusiastic flair of an outcast. In their world, the nightclub is depicted
as the centre of debauchery where guests openly smoke joints while alpha-males
fight for drunk girls. This inadvertently raises the question: what kind of
hellholes do they frequent?

If it wasn’t for Ahmed
Eid’s balanced and sympathetic performance, Azmet
Sokar may have failed completely. He gives the show enough gravity to
sustain it, and while the show doesn’t quite work as a comedy; it does make for
a fairly engaging, albeit cartoonish drama.

The show airs on Al Haya every day at 2PM and repeated at 2AM. For evening viewing be sure to catch at 7PM at Al Haya 2.