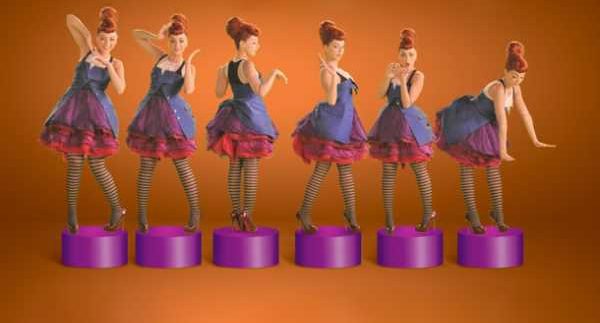 Egyptians take great pride in having introduced the Arab world to the
fine art of fawazeer (Arabic for riddle), a fast-paced variety of show designed
to offer the least bit of brain stimulation, while treating the eye to ample song
and dance numbers. Children of the 80s will recall with great joy the old Nelly
and Sherihan fawazeer, which were often imitated, but never duplicated. It’s
been two decades since the death of the art form; and tastes, standards and viewer
attention spans have changed. So how does the updated take on fawazeer measure
up to the classics? Well, perhaps the comparison is unfair.

Lebanese pop singer Myriam Fares’s show lacks the charm of the beloved,
old shows; it’s disengaged and artificial. However, the show distinguishes itself
by adding its own twists to the formula, and avoids comparisons by becoming an
orange instead of an apple.

27-year old Fares is a good fit for the new fawazeer; she inhabits the
show with the right amount of playfulness and glamour. However, when she’s not
dancing or singing, her abilities as an actress leave a lot to be desired, and her attempt at an Egyptian accent should have never made
it to the screen.

Fares plays three characters, whose only distinction is their different
names. Mira is a sucker for role-playing, and in each episode she plays a
certain profession. Mimi loves dancing; so she performs a dance and the
audience must guest which country the dance originates from. Last but not
least, Mima is a gifted performer that re-enacts one of the old Tarek Nour
commercials; and it’s our job is to guess the
product.

The only segment that presents a challenge is the dance number, as it
can get tricky. For example, during one of the episodes Fares busts her r’n’b
moves on the dance floor and the three possible answers are: American r’n’b,
Canadian r’n’b, or Australian r’n’b. Unless you’re well-versed in the subtitles
of different international schools of r’n’b dance; then you’re probably left
with no other choice but to make an arbitrary guess.

Fawazeer
Myriam looks very glossy and polished; the end product plays more like an extensive
video clip than the old fawazeers. Yet, behind all the glitter and the neon
glow lies a very odd insular quality. You hardly get to see any other face than
Fares’; as most human presence occurs either off-screen or in shadows. The result
is an icy milieu populated by silent silhouettes and the ominous voice of Tarek
Nour; a staggering choice for a show intended to inspire warmth and a sense of
communal camaraderie.

Despite its flaws, Fawazeer Myriam
manages to be one of TV’s most entertaining offers this month. The episodes are
short and fast, and the dance numbers feature some neat choreography. Also, the
prospect of winning 30,000LE by figuring out the answers doesn’t sound half-bad;
just beware the fine print pricing an SMS to the program at 5LE.

Led by Lebanese fashion designer Fouad Sarkis, the costume department laboured up to eighteen hours a day to make the 250 different outfits that Fares wears throughout the show. And given the conservative nature of Ramadan TV, extra care has been made to ensure that none of the costumes are revealing.