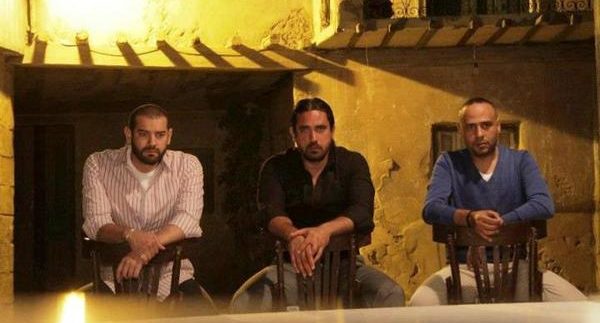 Three
friends, all of whom have a very punch first, think later approach to life,
work as hired guns for a big time thug. When they start to get angsty over
their pay, they find themselves on the wrong end of his wrath.

As
the title implies, the show takes place post Jan 25 and focuses on Egypt’s
number one national treasure; baltageya (thugs). It’s an attempt to humanize
them and to paint them as complex individuals and not the shadowy creatures
that hysterical rumours have made them out to be. From this angle, it actually
works. We spent some time actually puzzling over the choice of title until it
suddenly clicked that the three leads were supposed to be baltageyya and not
your run of the mill criminals. These are the people we hear about on the news
disrupting protests and poll stations, kidnapping people, stealing their cars,
etc. Refreshingly though, it takes a balanced approach to the thugs without
either demonising or making excuses for them.

The
show stars Karara as Mimi, Abdel Moghny as Dibo and Youssef as Youssef; the
same trio who starred in Mowaten X
together last year. Despite the fact that their actions can occasionally be
quite awful and their cavalier attitude to violence is rather disturbing, the
actors play their parts with a nuance that prevents these traits and deeds from
defining them. The material they’re given helps us to get to know the leads and
their friends and family so well that you barely see them as petty criminals
let alone baltageya since the show humanises them so much.

The
supporting cast, which is mostly female, is also packed with good actors with
El Shirbeeny and Raeis being the two main standouts. Shockingly enough, the
show features a couple of present and former belly-dancers who unapologetically
like their work, weren’t forced into it due to an abusive father/partner and
who don’t treat their job title as a euphemism for hooker. It’s a complete
break from the norm and a thing of beauty. Of course to balance it out, the
majority of the female characters so far both think and speak almost exclusively
about men and marriage.

Taraf Talet does a great and pretty entertaining job of weaving
the political events into a dramatic structure without being too heavy on the clichés;
it rightfully focuses on telling the story and not on thinly veiled political
analysis.