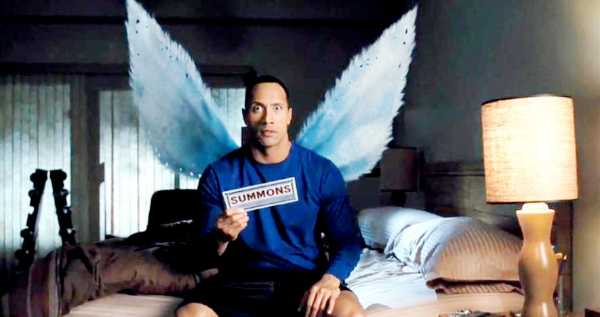 The Rock wearing a tooth
fairy dress is the high-concept pitch that sold Tooth Fairy to the studios. It’s an inherently funny idea, but
what’s remarkable about Tooth Fairy
is how it takes this intriguing concept and sucks all the fun out of it.

Completely missing the
mark, the filmmakers took this tongue-in-cheek concept and oddly treated it as
a family film primarily for children. The film seems oblivious to the contrast
between Johnson’s macho-wrestler persona and the kind-hearted
character that he portrays. The film is so utterly clueless as to what to do
with its own concept that it desperately resorts to ho-hum comedian Billy
Crystal to provide some laughter.

Derek Thompson (Johnson) is a minor league hockey player who goes by the
moniker the Tooth Fairy. He’s past his prime and has become some sort of a
novelty player that gets flashed for easy laughs during the game. Thompson nearly
debunks the idea of tooth fairies for the six-year old daughter of his
girlfriend (Judd), and as a punishment for his cynicism, he gets sentenced to
be a fairy himself.

‘Children need to believe
in dreams,’ the tooth fairy godmother (Andrews) explains to grumpy Thompson. However, if
believing in endless possibilities is important for young children, what’s even
more important is not to buy into the fairy-tale sentimental junk that Tooth Fairy shoves down our throat.

Johnson, or The Rock as we all like to call him, is a
good sport (no pun intended) and goes along with whatever the film asks of him.
He performs with a great sense of humour, but he acts as the tooth fairy with a
capital T, and that seems more than enough to please Tooth Fairy. The supporting cast adds a touch of fairy magic that
lends some credibility, although it’s a little sad to see the graceful Andrews
in this mess; her role feels like a poor rehash of her turn in The Princess Diaries.

Director Lembeck’s filmography reads like the best
justification to Tooth Fairy’s
failure. He’s the man behind the sequels to The
Santa Clause and some According to
Jim episodes, and with Tooth Fairy
he adds another instalment to his saga of duds. Even the special effects look
like they were test footage for an early 90s morphing software.

Johnson’s trademark eyebrow raise is something that you’re
going to do yourself after you’re done watching the Tooth Fairy, and if this nightmare of dullness isn’t a testament to
the power of dreams, we don’t know what is.

After subjecting you to 90 minutes of dismal comedy, Tooth Fairy tries one last time to get a chuckle during the end credits. Crystal and Andrews do a scene together that is more cute than funny.