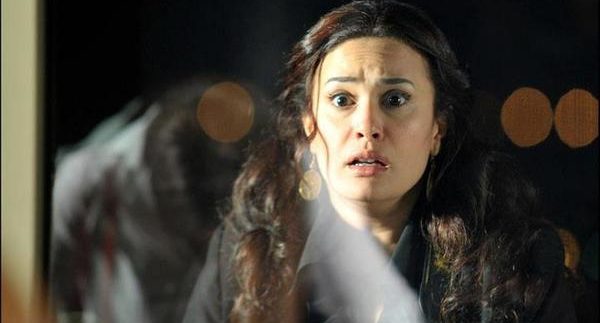 Sabry stars as
Fareeda, a photographer who witnesses a hitman murder one business tycoon and
seriously injure another in a bar named Vertigo in which two of her friends,
both of whom were killed in the attack, worked. Armed with photographs of the
assassin, Fareeda tries to find out the identity of both the killer and the
people who ordered the hit without exposing herself and her sister Fawzeyya (El
Sibai) to their wrath. She becomes entangled in a web of filth and corruption
that spreads far higher and wider than she ever thought possible; a web that
includes not only business types but politicians, journalists and artists as
well.

We’re kind of
loving Vertigo in a way that we
previously thought impossible for a Ramadan TV show. While most of the shows
this year look nothing like the serials of yore when it comes to production
design and camera work, Vertigo goes
the extra mile. The score is one of the first things that pops out at you and
while it can occasionally be slightly overwrought, with it’s cold, electronic
pulses it’s unlike anything you’d associate with Egyptian TV and goes
perfectly with the show. But the really great thing about Vertigo is that it in no way feels like an American knock off. The
show doesn’t tow the line between Egyptian and American styles so much as it
integrates them beautifully. It occupies this sweet spot where everything is
aspirational and TV glossy without veering into the ridiculous. Both wealth and
poverty look glamorous without being offensive or obscene and the actors all look
like normal people – just prettier, shinier.

At the centre of
the show is not the web that Fareeda gets caught up in but the friendship
between her and her best friend and co-worker Omar (El Shafei). Fingers crossed
that their relationship stays platonic throughout the season, but even if they
do become romantically entangled later on – as is becoming more and more likely
with every passing episode and with each sigh from Omar about how lonely he is –
we’re happy that we’re getting to see what looks like a gloriously real and
strong friendship between a guy and a girl. El Shafei, in
addition to being adorable, provides most of the show’s humour.

While the very
talented Sabry is the undisputed star of the show, she’s surrounded by quite a
vast and stellar supporting cast that includes, among others, El Lozy and Hatem
as a journalist couple working at rival newspapers. As the episodes pass the
story grows in scope very organically and the web of corruption becomes more
intricate.  The number of characters swells and the connections between them
grow more obvious. But because the characters are so interesting and so
diverse, the story acquires a very personal and intimate vibe despite being one
that encompasses a huge swath of society.

Although it will inevitably attract criticism as an adaptation of Ahmed Murad’s book, as a
standalone TV show it’s given us more than enough reason to be optimistic and
keep watching. We’re hooked.