The Chronicles of Narnia: The Voyage of The Dawn Treader

Narnia: The Voyage of the Dawn Treader: A Magical Adventure 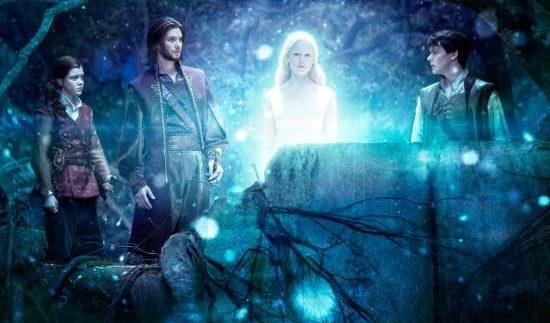 The first
two Narnia films were moderate
successes that never reached the stature of the Harry Potter or the Lord of the
Rings franchise. Narnia lacks the
imminent danger present in both these franchises, and no matter how rich and
imaginative the world of Narnia is; it never fully makes the transition from a
children’s fairy tale to fantastical adventure film.

This may explain the
fumbling box office performance of the second Narnia film and Walt Disney’s subsequent decision not to finance Voyage of the Dawn Treader. However, after
a brief period of uncertainty, it was announced that Fox would produce the
film, and here we are today with the third Narnia
entry.

Edmund (Keynes) and
Lucy (Henley) are
staying with their cousin on a short family visit. The two siblings can’t stop
speaking of their past Narnia adventures and how magical they were, which makes
it a welcome surprise when a painting in their cousin’s room opens a portal and
sucks them back to the world of Narnia.

Edmund and Lucy are reunited with Prince Caspian (Barnes), the new king of Narnia. Together, they
must take a journey across the sea to retrieve the seven swords of the seven
lords and place them on Aslan’s (Neeson) table before evil takes over. Along the way, each member of the group must
overcome a number of tests. They get tempted and confused; but with the aid of
Aslan, they learn new lessons in nobility.

There is a
reason why all good fairy tales have witches in them; but this is an aspect
missed in Voyage of the Dawn Treader. The
film is more relaxed than a fantasy adventure should be, and the absence of a
tangible antagonist or a clearly established defying force makes it all the
less engaging.

Even though
Voyage of the Dawn Treader misses a
lot; it hits where it matters the most. The dazzling spectacle and the polished
effects make the film’s shortcomings more forgivable and the third act is
where the pace finally picks up for a gripping sea monster battle.

As for the
3D element, it doesn’t add much value to the viewing experience other than a
few extra pounds to the ticket price. 3D effects are used sparingly, which seems to be
the only potent way of utilising the technology in live action films.

All in all, this film is good fun for the family with decent thrills, but it probably won’t leave you
yearning for a fourth Narnia instalment.

Harry Potter and the Chamber of Secrets, The Lord of the Rings: The Fellowship of the Ring, Eragon

Simon Pegg replaced Eddie Izzard as the voice of Reepicheep, the chief mouse and self-appointed servant to Prince Caspian.