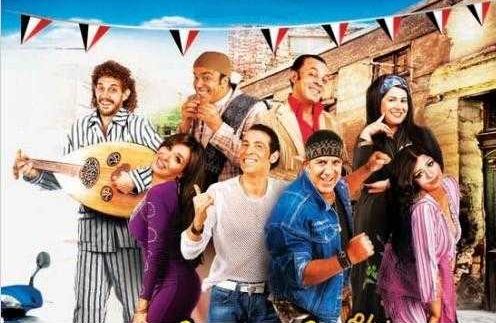 As Scarlett Johansson said in 2001’s Ghost
World: ‘This is so bad; it’s gone past good and back to bad again.’ Welad El Balad (Sons of The Country) is the
kind of trashy film that invites sneering jabs from critics and excessive hyperbolic
chatter.

If film is a true reflection of society; then don’t look in Welad El-Balad’s mirror. And if film
really influenced the masses, then to put it succinctly: we’re done for. The truth
of the matter is that this film is just one of many numbing formulaic pieces of
junk designed to kill viewers’ time by offering a paltry mix of lowbrow
chestnuts.

Films hailing from this tradition usually play down the story and focus instead on character-driven antics. Forget about
names; El Soghayar is
playing someone called Jawa (named after the brand of home-delivery motorcycles),
but that’s as far as the character deviates from the real-life crooner.
Ostensibly, everyone is playing a financially crippled version of themselves.El Soghayar
is an aspiring singer, Dina is an aspiring belly dancer, and Lotfy’s goal is
just to stay out of prison. There is also a mortician having trouble with consummating
his marriage, more or less a pawn for Viagra jokes. Also, Angie Wegdan (the
chubby girlfriend in H Dabour) gives an uncharacteristic performance as Bata,
El Soghayar’s love interest.

Needless to
say, the film is a can-full of debauchery followed by the usual sermon for dessert.
However, amidst all the carless rambling, one moment does stand out. In one scene,
Lotfy gives Dina an ultimatum: she must choose between him and her dancing
career. For all intents and purposes, Dina gives a well-argued retort, where she compares
belly-dancing to swimming: she points out the inherent hypocrisy of attacking
the skimpy outfits of one while accepting those of the other’s. It is flawed
logic but admirable food for thought nonetheless.

The best thing that can be said about Welad El Balad is that there are worse films out there. Production
values are decent, song numbers are catchy, and the running time is a merciful
85 minutes-long. Yet, even for crass films
likeWelad El Balad, there is a
surprising lack of funny moments, even those in the name of bad taste.

It took over 8 million LE to bring this little gem to the screen. It also ended up as the Box Office champion during the Eid holiday.