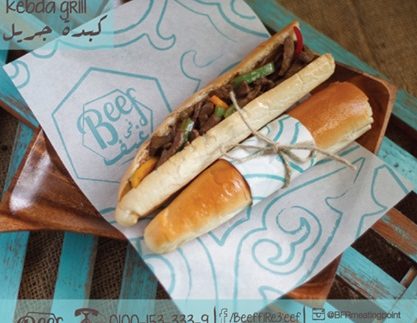 It’s seems almost commonplace now, but when the Cairo dining scene was introduced to the likes of Zooba and Cairo Kitchen, there was mixed reactions to this new take on traditional Egyptian street food. Many bemoaned the prices of the kind of food you can get for a couple of LE, although the aforementioned restaurants found a market; the kind of diner that wouldn’t eat from a cart.

The trend went on to give birth to many other similar concept, one of which is the amusingly named Beef Fi Re3’eef. Taking this new approach to liver and sogok (Oriental sausages) and liver sandwiches and the like, the Mohandiseen eatery has quickly come to be popular – some even claiming that it offers the best hawawshi in Cairo. At the time of our visit, however, all the praise flattered to decieve.

The venue’s decor is quite simple. Three or four steps above sidewalk level, the first thing that grabbed our attention was the rustic blue floor tiling, which matched the brown and turquoise colour scheme. On your left and right are small foldable wooden tables decorated with a cactus plant pot. The back wall behind the counter is decorated with wooden shelves and more plant pots.

The menu is quite limited and all the sandwiches are the same size. We opted for Alexandrian Liver (7.50LE) and Turkish Sogok (7.50LE). We also opted for a Sogok Hawawshi (18.5LE) and fries (6LE). From the desserts, we landed on the Sakalans (9.50LE).

Straight off the bat, if your beef costs less than your chocolate and honey, there’s something very wrong. All the sandwiches, minus the Hawawshi, are served in fino bread – the same basic fino bread you can buy at any supermarket.

The Turkish Sogok was our favourite, but that’s not a testament to how good it is. With hardly any Sogok to be found in the sandwich, most of what we could taste was just bread, seasoning and onions.

The Alexandrian Liver was slightly more generous portion-wise, but in the flavour department, it was less than average, suffering the same faults as the sogok. As for the Sogok Hawawshi – the supposed highlight of the night – was gravely disappointing. The bread was burnt and the sogok stuffing was, somehow, lacking in flavour.

Maybe the Sakalans could salvage the situation. Nope. Differing only from the traditional cream, honey and halawa combination with the addition of Nutella, all you can taste is the bread – which is quite a feat considering the overload of sweetness in the filling.

That leaves only the fries, which, in fairness, were cooked to a pretty nice outer crisp and soft centre.

While the overall aesthetic quality of Beef Fi Re3’eef ticks all the boxes of the balady-modern trend, there’s very little here to keep someone coming back. Beef Fi Re3’eef is stuck floating in no man’s land between the cheap cart food and the restaurants that have made a success of the concept.

You're essentially paying higher prices for something that is of lower quality than the foods it tries to elevate.