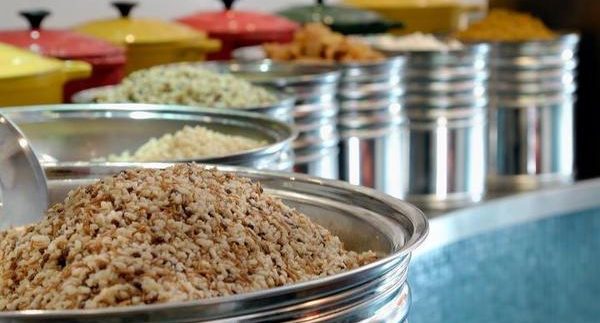 It seems that
balady-chic is rapidly taking over Cairo. We were first introduced to it a couple of weeks ago when Zooba opened
up in Zamalek and now a few blocks further down 26th of July Street,
you will find the Cairo Kitchen; just around the corner from La Mezzaluna.

Interior designer
enthusiasts are in for a real treat at Cairo Kitchen; with high ceilings, the
venue is instantly appealing and the Cairo Kitchen designers made the most out
of this feature by mixing tradition with retro. With pop-art Arabic text on the
wall and a copper-tile ceiling, it feels like you’ve stepped into a time zone
where Cairo is in fact the coolest city in the world.

The restaurant
consists of different levels with various types of seating. We nestled
ourselves on the upper level, across from the food counter and drink-station,
at an American diner-style bar. The food corner itself is a true jewel. Starting
on the left of the semi-self serve counter, there is the koshary station with
all the different ingredients. Moving down towards the right is a generous salad
bar and further past the salad are the choice of desserts.

We started off with
a refreshing glass of karkadeh (7.50LE) before indulging in the food. We opted
for the large salad platter (25LE) and received a plate filled with all kinds
of Egyptian style salads. We fell in love with their deliciously spicy foul; though
it was a bit heavy on onions, the flavour of the beans still dominated the overall
taste. The kishk we got was delicious too with a creamy aftertaste; the walnuts
on top added to the flavour as well. We were less impressed by the zucchini stuffed
with cottage cheese, however; the cheese had a very strong flavour that overwhelmed
the mushy zucchini. The eggplant and yoghurt salad fared better and served as a
very refreshing dip.

For the main course,
served in a tagin dish, there was Koshary Eskandarany (39LE) and Fereek with
chicken liver (29LE). The Koshary Eskandarany came with shrimp and can best be described as a glorified version of normal koshary. Though the shrimp were flavoursome and
the tomato sauce tasted of wonderful fresh tomatoes we couldn’t help but be a
bit disappointed with the dish. It sort of lost its koshary identity and turned
into a regular rice-and-shrimp dish; this was mainly due to the lack of some
key koshari ingredients, such as chopped onions.

The fereek with chicken liver
was tasty but not very impressive; the fereek had a touch of coriander that
gave it a zesty taste but the kibda was a bit too dry for our liking. We ended
our meal with rice pudding (9.50LE) which came with a generous amount of nuts on
top. Though the taste was sweet and satisfying the consistency of the ‘roz bil
laban’ was disappointing; it was a bit too loose.

The staff members at Cairo
Kitchen are super nice and will help you out in the food selection process.
Healthy eaters who might otherwise stay clear of Egyptian dishes
might want to try the Well-being koshary, which is made with wholesome brown rice
and brown pasta.

Interior and staff
wise there is nothing wrong at Cairo Kitchen but the food is still a little off base. Having just opened, we still have high hopes for the restaurant though.

Cairo Kitchen and Wel3a are in cahoots. You can order any of the restaurant's dishes while sucking on a shisha at Wel3a. It'll be delivered right to your table.

The restaurant is a smoke-free zone.

They have microwaves and we weren't entirely sure why.