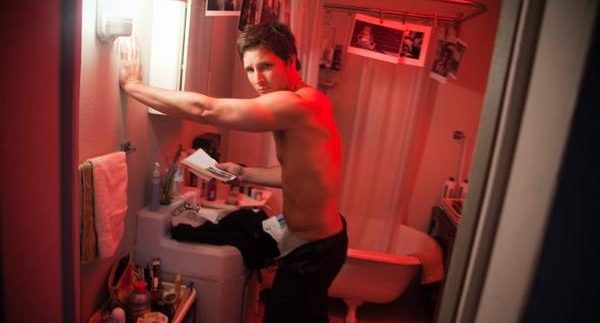 Bobby
(Facinelli) is a pickpocket out of necessity. His dad died leaving him to deal
with the half-a-million in debt that he owed to Jax (Gallo), a local mobster.
Having paid off four fifths of that amount and finding himself almost rid of
his shackles, things start to get really messy. Bobby palms a police officer’s (Madsen)
badge, sparking his fury and bringing him down on his tail, hard.

To further
compound matters, he bumps into Lucy (Alexander), the
one-night-stand-that-got-away, and discovers that she’s pregnant with his baby.
With a livid police officer and mobster after them, Bobby has to gain Lucy’s
trust so that they can figure out what to do about the baby; get an abortion
or give the whole parenthood thing a shot?

Loosies is, despite the awful name which refers to
cigarettes being bought as singles, pretty entertaining. Another surprise is
that, devoid of the awful dye job and makeup bestowed upon him by the Twilight make up department, Facinelli
is genuinely charming. It also helps that his character is a criminal with a
heart of gold who wants to do right by Lucy, thus requiring him to frequently
unleash the full force of his puppy dog eyes and killer smile on her. In short, charming is
his character’s number one trait.

In
fact both the leads are immensely likeable, have great chemistry and it’s due
to them that the film is as fun as it is – despite the fact that we don’t get
to know much about Lucy other than her pregnancy. The story isn’t anything new,
it’s often ridiculous and has some pretty huge potholes, the biggest being the
police force’s incredible incompetency.

Not exactly riveting
or death defying stuff, it is obviously a product of the film’s visibly
miniscule budget. But again it’s a testament to Facinelli’s charisma that he
makes sitting through this film not just tolerable, but actually enjoyable. For
the most part, you only zoom in on the bad stuff in hindsight.

Contraband, This Means War, Knocked Up

Facinelli wrote Loosies seven years ago but it was only after his star rose with the Twilight movies that he was able to get it made.