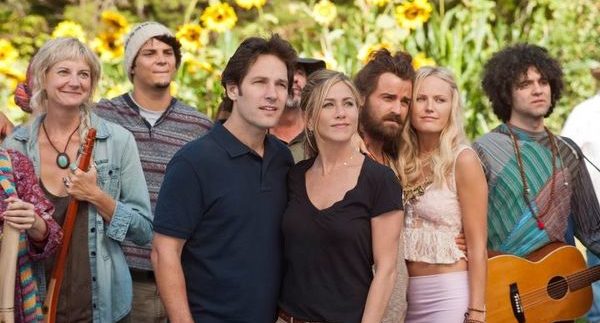 George (Rudd) and Linda (Aniston) are stereotypical, high powered New
Yorkers. When they both lose their jobs, they’re forced to sell their newly
acquired matchbox of a flat and move in with George’s brother in Atlanta. Due
to their host’s rude, condescending manner, their stay turns into a full blown
disaster leading George and Linda to try living at the nearby commune, where
the residents’ hippy, free love ways drive a wedge into their seemingly perfect
relationship.

Paul Rudd is awesome. Some people have this natural quality that just
draws you to them; something that makes it impossible to hate them. Whatever
that quality is – charisma/charm/etc. – Rudd has it in spades. He, along with
the rest of the cast who are all consistently better than the material they’ve
been given, makes the film. While Rudd and Aniston mostly have to act awkward
around their new housemates and aren’t really given much comedic material to
work with, the supporting cast are walking stereotypes that lend themselves
easily to comedy.

One of the standouts is Theroux, who plays a
charismatic hippie whose knowledge of modern technology peaks at pagers and
faxes and who’s trying desperately to get into Linda’s pants.

Take the cast away from the equation and Wanderlust is just a slight comedy that takes the mickey out of
hippies in a light and fun but repetitive way. The film is pretty funny if not
particularly memorable; it’s the kind that you watch when you just want
something to brighten up your mood. The jokes won’t have you crying with
laughter, but will still make you chuckle, especially the ones that involve
Marino and Watkins as George’s asshole brother and exasperated sister-in-law
whose bickering frequently steals the film from the peace and love part of the
cast.

The ending wraps up the film in neat bow while simultaneously signifying
everything that’s wrong with it; it relies far too much on clichés and uses the
cast as a crutch in lieu of a proper story. The cast are so good that they show
up just how middling and unoriginal the script is. The film deals with not only
every stereotype about hippies but also clichés about corporate drones, awful
business men and rich housewives, and it takes the most straightforward path
possible when portraying each of them. Yes, they’re usually funny, but with a
cast like this, you’d expect the film to be smart as well.

Wain’s next film will also star Paul Rudd in addition to Amy Poehler and Max Greenfield and will be called They Came Together.